The weldment feature in SolidWorks is a powerful tool. It can be used to insert individual beams or to create and entire frame structure for fabrication. There are two methods for inserting a structural member into an assembly, these will be described in detail. There are also various methods, to create the geometry for placement of members, when creating a frame.

SolidWorks has structural profiles (weldment profiles) saved as library features. When a structural beam is selected for insertion, SolidWorks sweeps the profile to the length of the selected reference. When two segments are connected in a sketch, the result is two separate weldment bodies.

Begin with a 2D sketch on the right plane. Sketch the structure of the sides of the frame using  lines.  Dimension the sketch so that it is fully defined.  Once complete, offset two planes at either side of the right plane.  Set both offsets as half of the width of the desired frame. Create a sketch on each plane and use convert entities to reference the lines created in the first sketch.  The final step is to interconnect the two sides with cross members. Create a 3D sketch and connect the two sides using lines.

See also  How to use Slot Mate in SolidWorks? 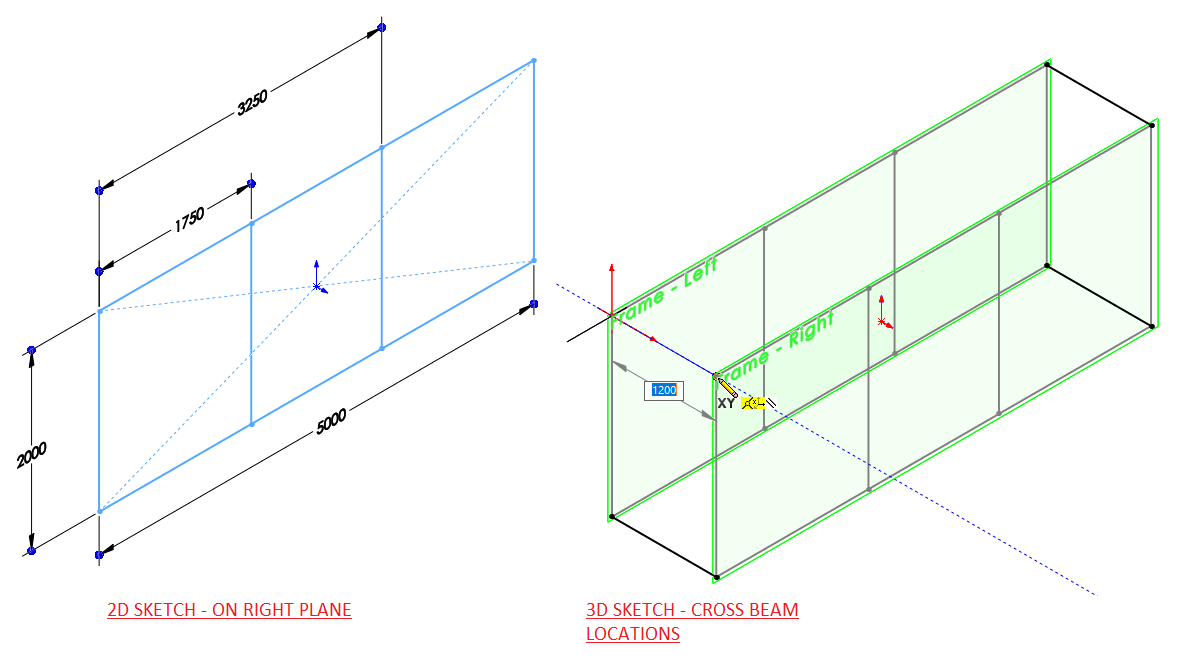 Edit dimensions for the sides using the initial sketch. The width of the frame can be edited by moving the planes.

This method is similar to the 2D skeleton sketch, instead of creating the offset planes, use insert grid. Select a plane for the initial sketch, then select “Insert” – “Reference Geometry” – “Grid System”. This will launch a sketch editor relating to the grid system option.  Draw the necessary 2D geometry  as shown above. Upon exiting the sketch, the GridSystem options will appear. For the frame shown above set the values of instances to 2 and default height to 1200mm. The image below is to indicate that multiple levels can be created at once, and that the height for each level can be manually altered. 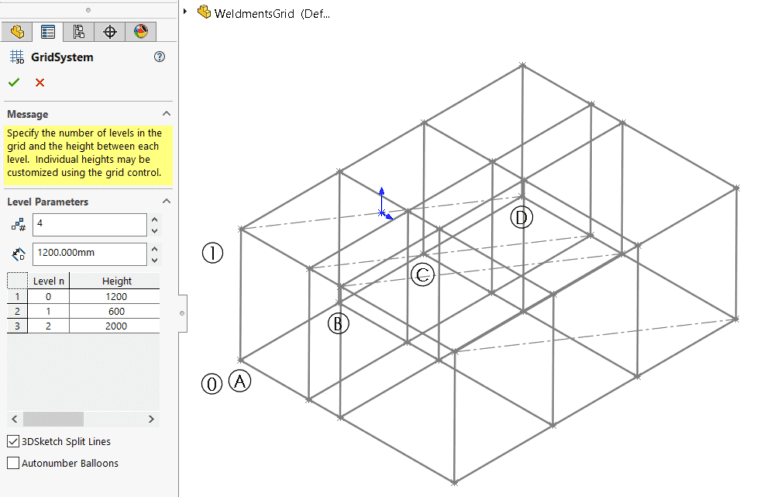 The grid system will automatically interconnect the sketches for placement of cross beams. If the 3D sketch does not appear, expand the grid system feature in the DesignTree and set it to visible. 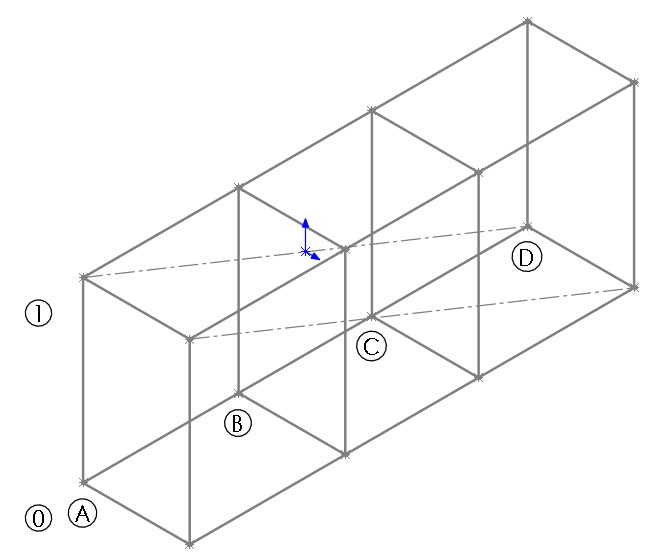 Similar to the previous methods, begin by creating the 2D sketch of the frame structure. Once complete, use extrude surface from the surface tab of the CommandManager. The final step is to create a 3D sketch, use convert entities to reference the edges from the extruded surface. 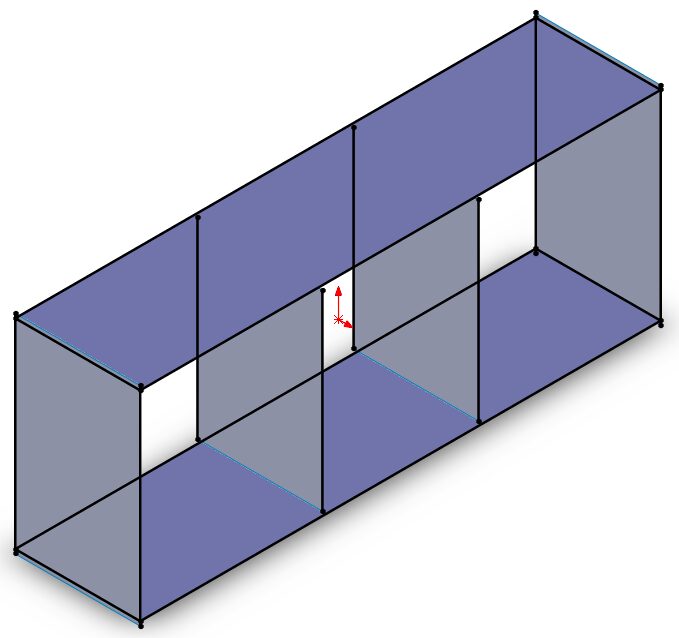 Surfaces do not add mass to the model, there is no need to delete the surface extrude after creating the 3D sketch.

The process is the same as described above, this time use a 3D sketch to create the entire frame. To constrain entities in 3D sketches there are various options. One vertical beam has been constrained to 1750mm from the corner post, on the opposite side the line is constrained using a construction line along the X-axis. The other two lines  (3250mm) have been constrained on a plane. This has been done to illustrate how quickly 3D sketches can become complex for editing.

See also  How to Trim Surface in SolidWorks? 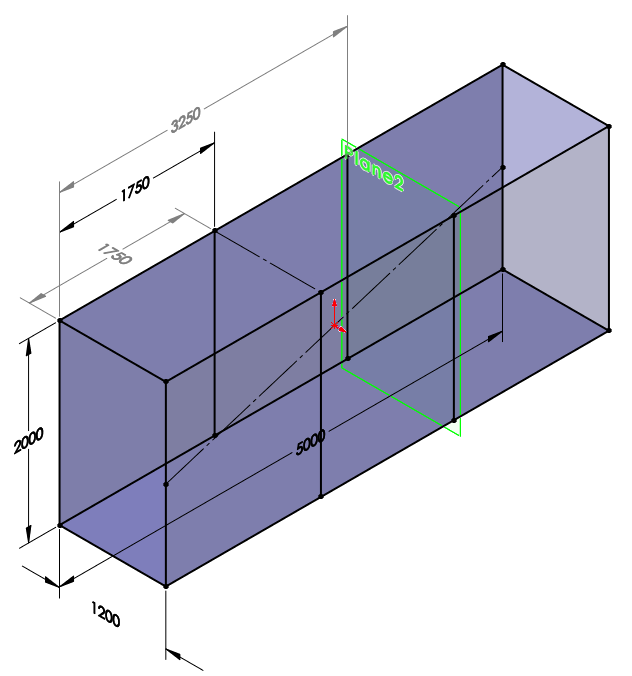 Now that the frame has been sketched, members can be added. Click on the Structural Member on the Weldments tab of the CommandManager.  Use the following settings:

SolidWorks defines two rules for which members can be part of a single group.  The segments must either be connected end to end, or they must be parallel otherwise. Groups are used to automatically apply the correct end treatments to the beams. The trim operations applied follow a hierarchy, group 3 members are trimmed to the faces of connections to either group 1 or group 2 members. Similarly, group 2 are only trimmed to the connecting faces of group 1 members. The standard, type and size cannot change between groups.

See also  What do you need to know for an Entry-Level SolidWorks Job? 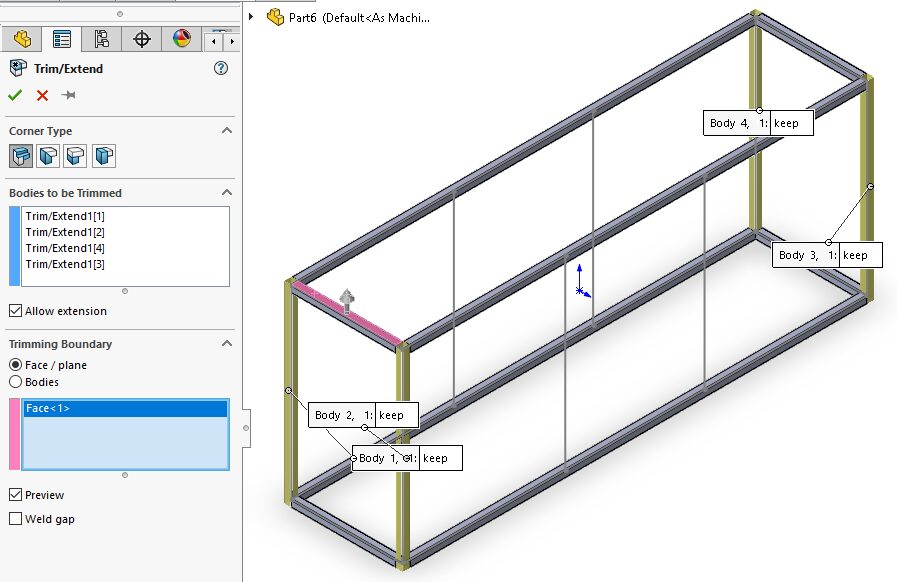 Tip: If the beam type and size are known, offset the lines in the 2D sketch to avoid the trim/extend operations. 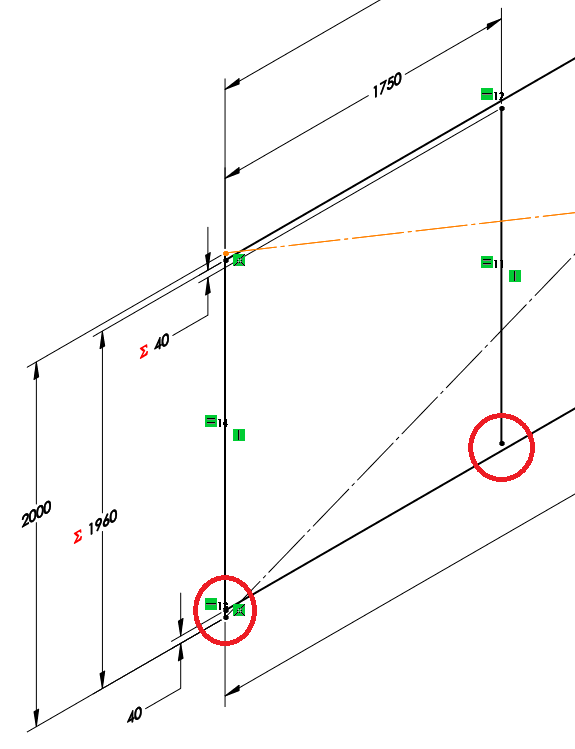 Select the structural member button again, to add other member types or sizes. Use angle and the locate profile button to correct the orientation of the beams.

Insert weldments, as individual beams or entire frames, the same way a normal part is added.  Alternatively, beams can be inserted using the SolidWorks toolbox.

Some standards of the SolidWorks toolbox contain structural members that can be inserted into assemblies. Individual beams can be added to assemblies through drag and drop from the Task Pane. To do this, use the following instructions: 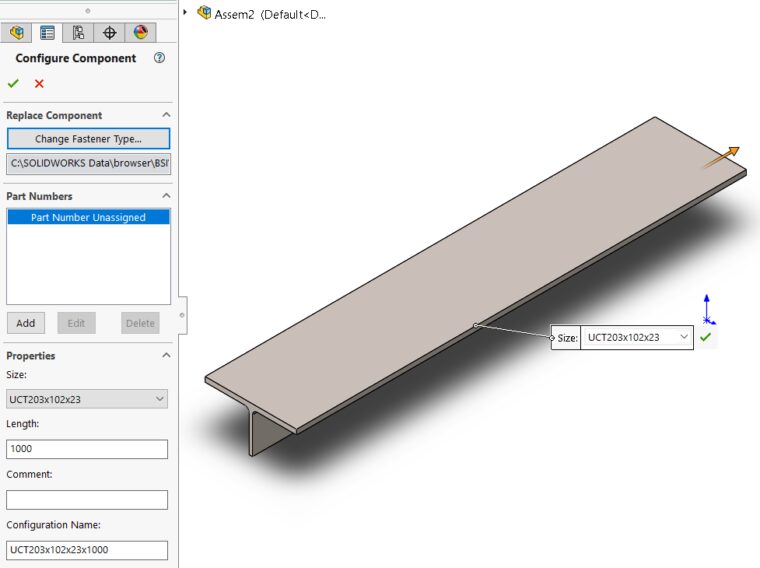