Hi everyone. In this tutorial, we will be looking at splitting a part into multiple parts and saving the bodies separately. This tool is useful when you would like to have a bit of a general idea about multiple things to make from a simple part. For example, take the part below which is just a rectangular block. You wish to split it in length and thickness. You can do that following the next procedure. 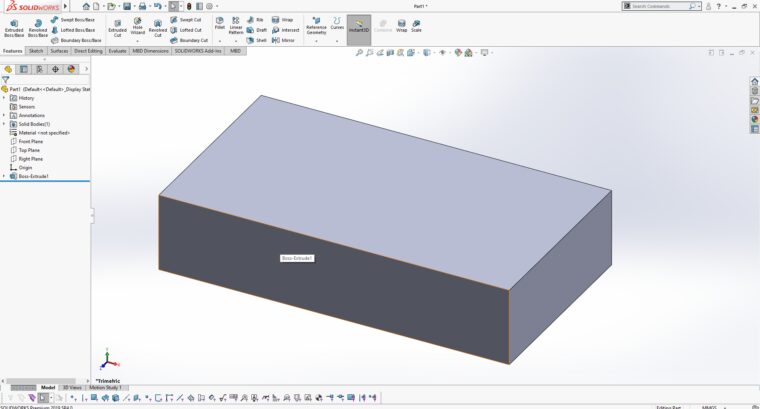 There are two forms by which we can perform the act of splitting bodies. One of them is through sketching a partition line which cuts the part in exactly the shape that you want. Once done with the sketch, you can simply go to the split command. You can either search it in the command searcher in the top right of the SolidWorks software or you can navigate to Insert-Molds-Split command as visible in the picture below.

See also  How to use SolidWorks Freeform Tool? 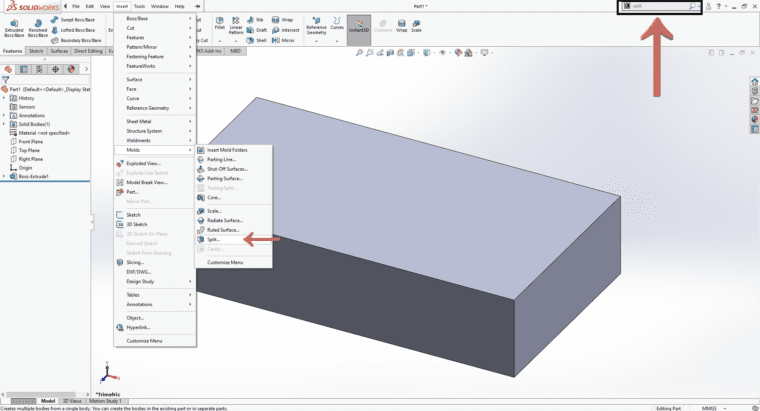 Now make a sketch as shown in the picture below. It must intersect part completely as this is how the command separates the two bodies. If you want to make a certain part separate, use the sketch to define it and then click the Split command. The parameters show up on the left side of the property manager. 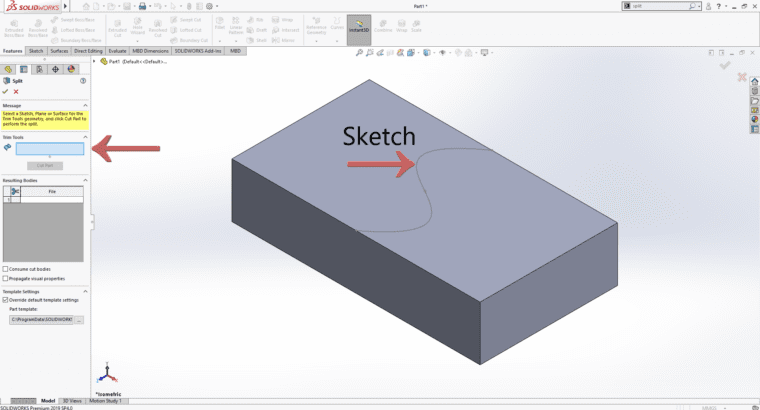 You can see the sketch on your right side as an S splitting the rectangle in half. The other one is Trim Tools where you specify the sketch by clicking on it. Once you click the sketch, proceed to click the Cut Part command below it. This will split the parts in two by default and show the split parts as two bodies in the Resulting Bodies option below. This is still not implemented. Click the two bodies and they will be tick marked in the property manager. Tick the green checkmark and the two bodies will form.

See also  How to Change Background Color in SolidWorks? 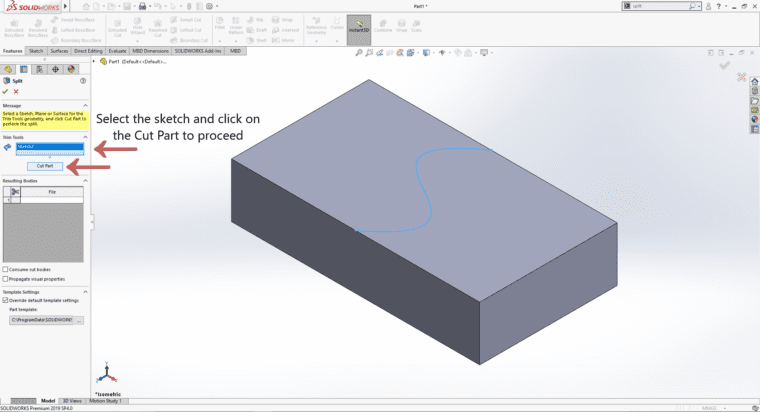 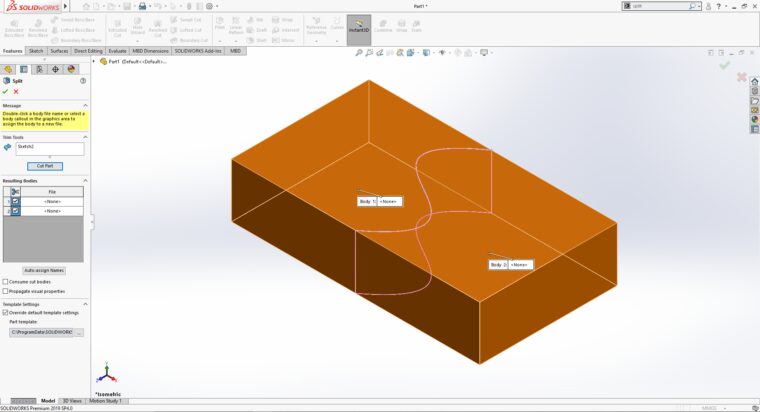 You can view them in the model tree as shown in the highlighted section under Solid Bodies. There are two mentioned as Split 1 and Split 2. 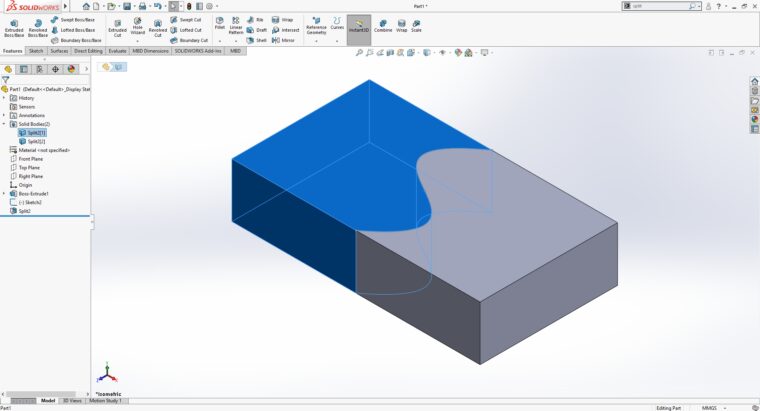 There is another method to split the bodies through a face intersecting the bodies. See the below example. Just click the face when you choose the Trim Tools option. This will cut the part along that face and separate it from the next portion. This is in the next image. Hence you get another option to split the bodies using faces. 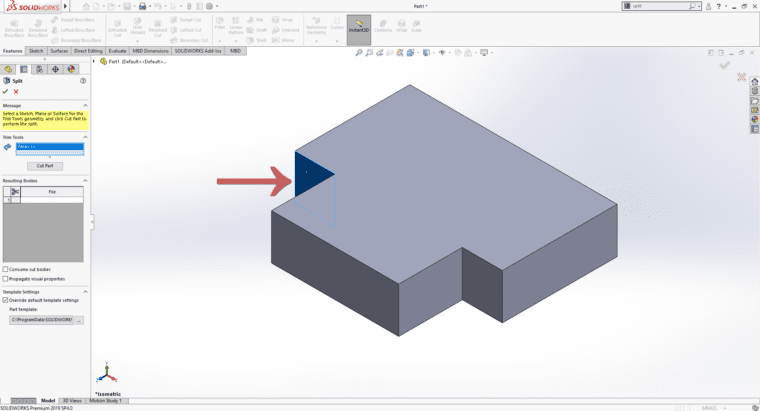 See also  How to use Interference Detection in SolidWorks? 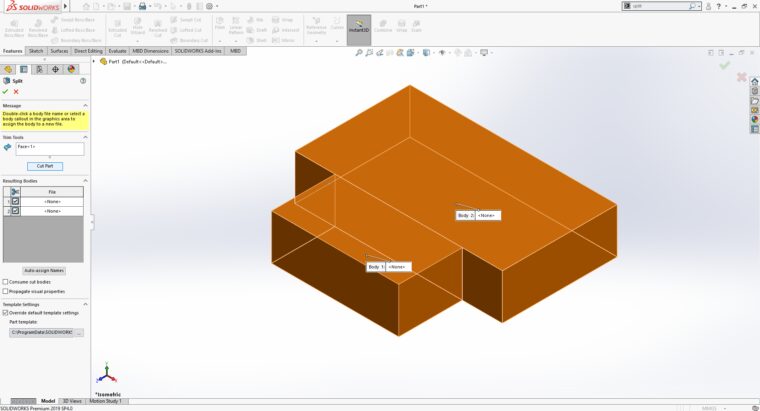 The final product is the same as the bodies shown separately in the Model Tree. 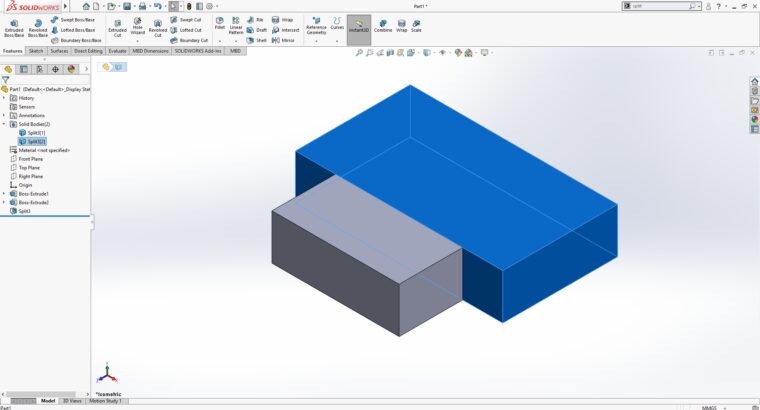 This is how you can split a single body using Molds feature Split. Hope you liked it and keep coming back for more!

We have a lot of tutorials about all the features and functions of SolidWorks. Keep on reading.