What is a Multi-Body part in SolidWorks?

In SolidWorks, a part document (.sldprt) can contain multiple bodies. These bodies can either be solids, surfaces, or graphics. A Multi-Body part file is one that contains more than one solid body. If a part file has only multiple Surface bodies it is not considered a multi-body part. Graphical bodies have very limited usability in SolidWorks hence these are also not considered as a Multi-Body part.

How do I know if a part file is multi-body?

A folder named Solid Bodies along with the number of Solid Bodies present in a part document appears in the FeatureManager design tree. You can expand the folder to see the list of all the solid bodies. You can right-click on any of the bodies to rename them according to your choice (by default the name of the body will be the last feature performed on that body). You can hide/show them or change their transparencies. You can do exploded views. You can assign them different materials and appearances. 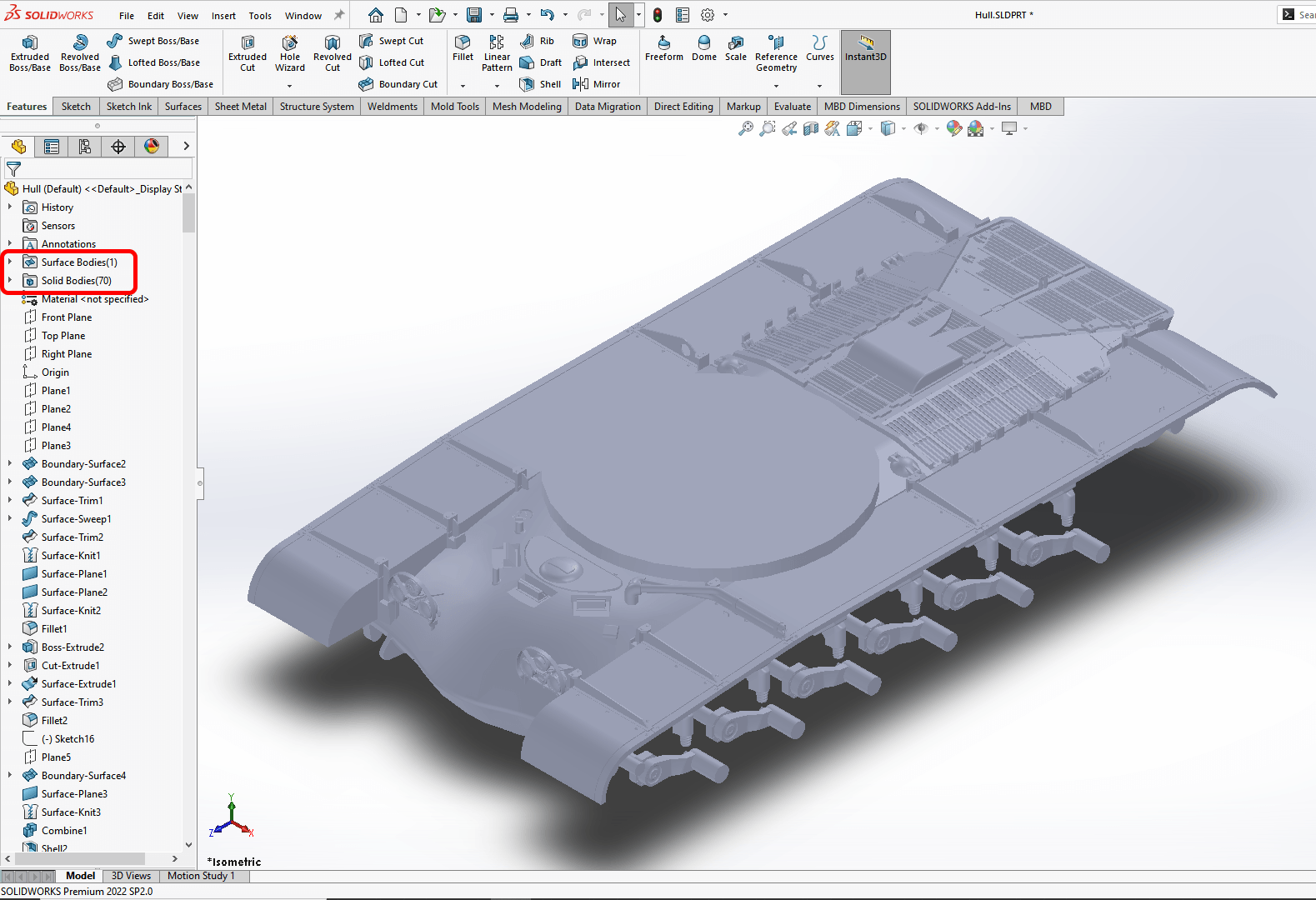 What is the difference between a MultiBody part file and an assembly?

A multi-body part consists of multiple solid bodies that are not dynamic i.e. you can’t move them around, while an assembly is used to represent dynamic motion among bodies. Hence, multi-body parts cannot be used instead of assemblies.

Also, tools such as Move Component, Dynamic Clearance, and Collision Detection are available only with assembly documents. A Multi-body part file can be shared directly but you can’t share an assembly file without the part files that were used to create the assembly in the first place.

Tip: It is good practice that one part (multibody or not) should represent one part number in a Bill of Materials.

Why and when should I create a multibody part file?

There are several reasons why you may want to create a multibody part. Some are listed down below:

1. It is easier to use the Pattern/Mirror command of bodies: More often than not we find ourselves to be modeling a part that is either entirely symmetric or has some symmetry or some type of pattern in it. Symmetry modeling not only simplifies the creation of axis-symmetric parts and saves huge time but it also speeds up performance for these types of parts. 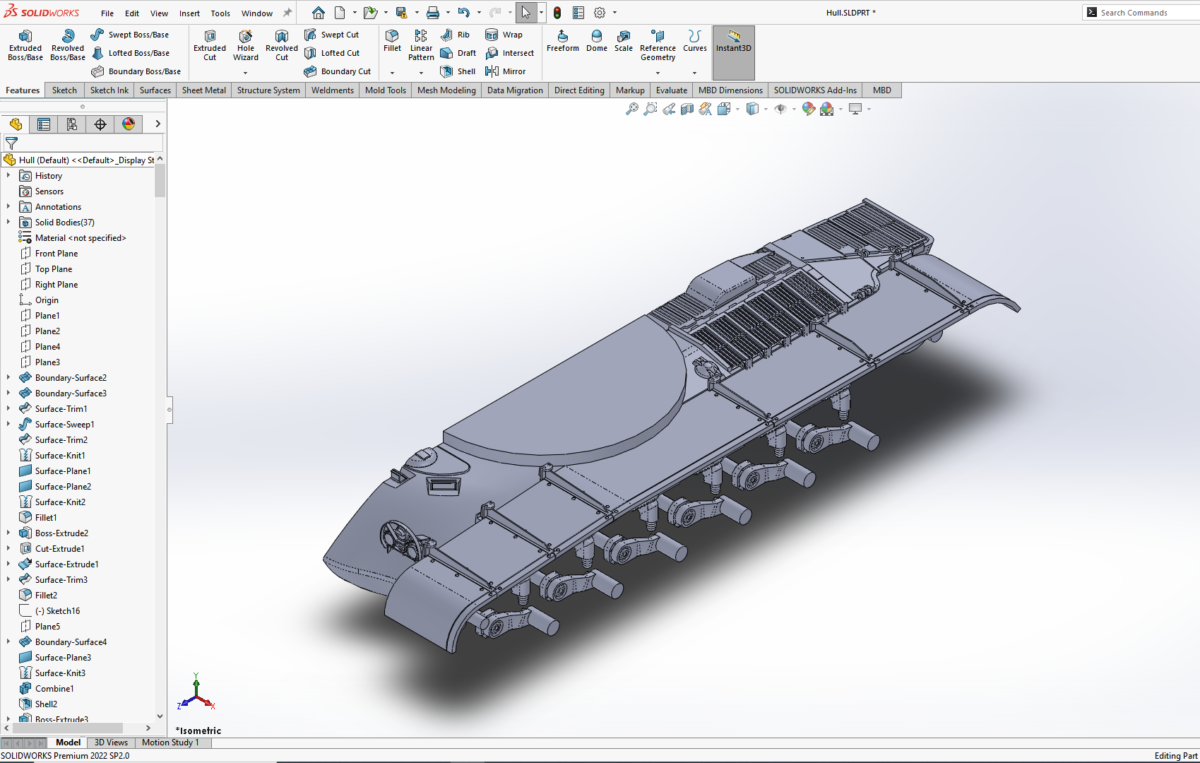 To make a pattern/mirror of bodies click on the Bodies option present in the PropertyManager of that tool and then select all the bodies you want to pattern/mirror. Use box selection if there are a lot of bodies. While mirroring bodies you can also select the Merge solids option and then specify the Feature scope (explained below) to make the new body combine with the old one. 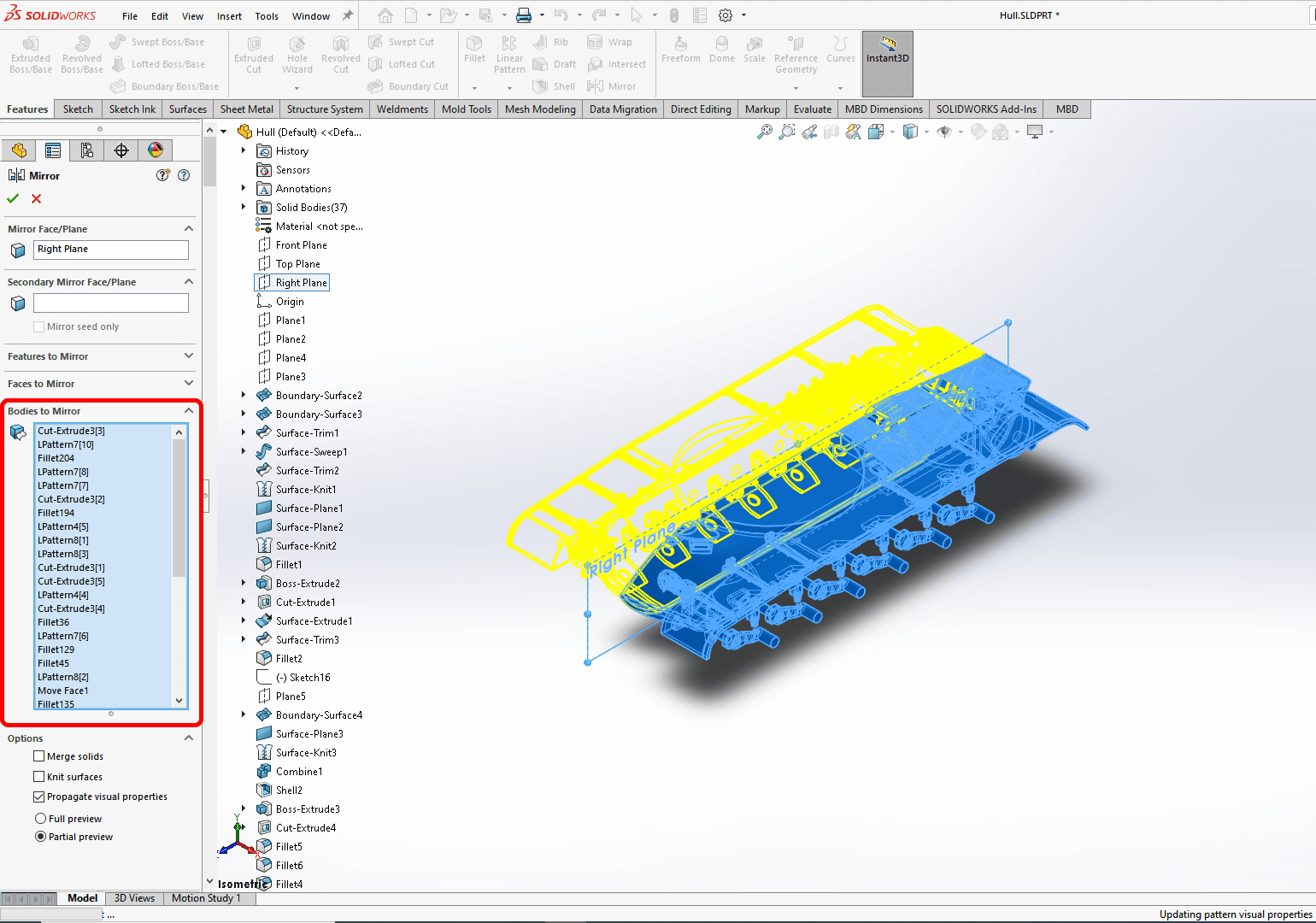 For Patterns, you can use the Combine tool (as many times as you like) available in the Direct Editing Tab or go to Insert-> Features -> Combine to combine multiple overlapping/coincident solid bodies into one.

See also  How to use SolidWorks Intersection Curve? 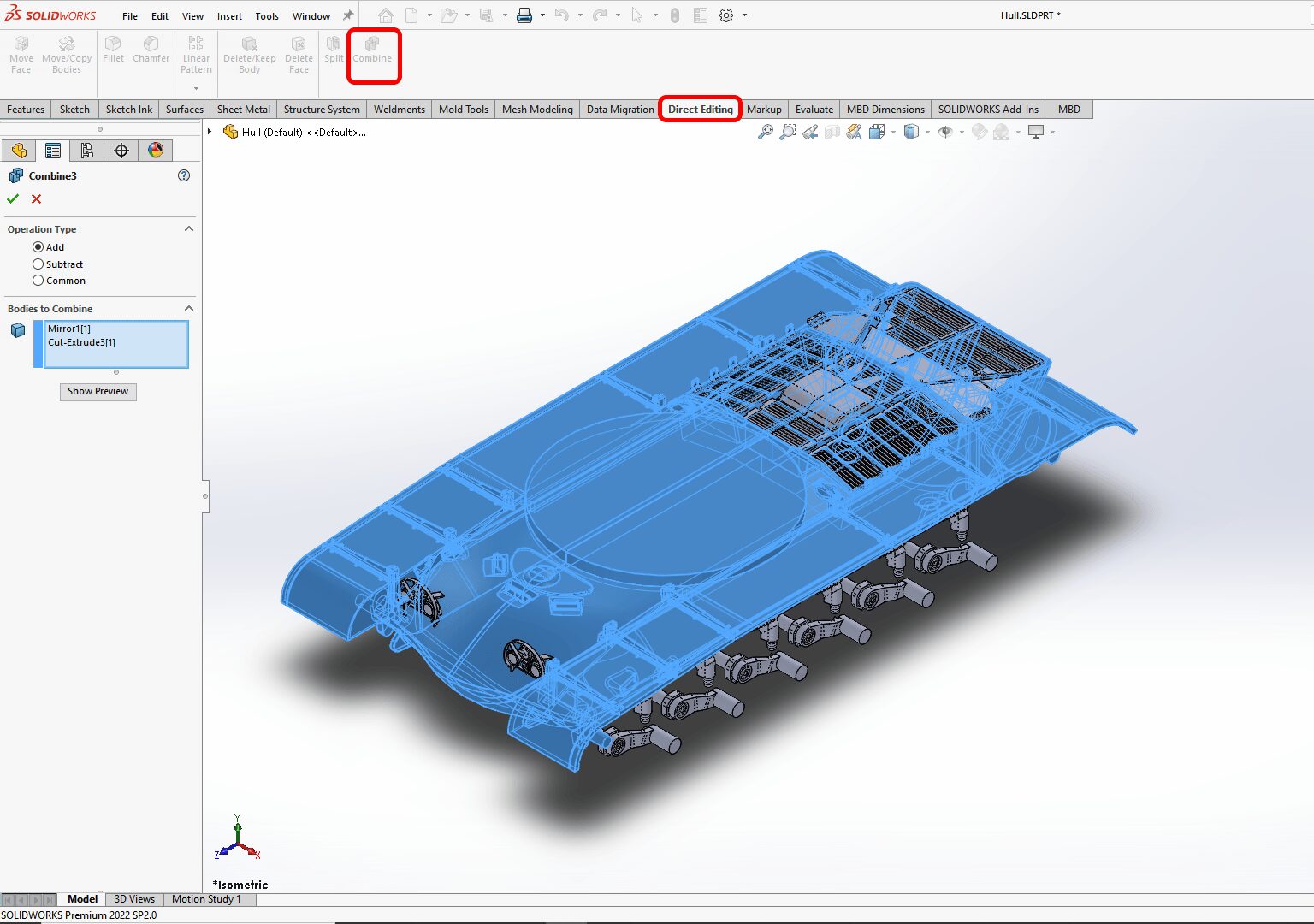 2. Shell can only be applied to solid bodies and not on features: Let’s say you have a solid body that is already shelled and now you have to add a shape that is to be shelled with the same thickness. Since you have already added a shell feature to the body you can’t add this feature again with the same thickness. So what you can do instead is to make that shape as a separate body, apply a shell on it and then combine or bridge it with the existing body. 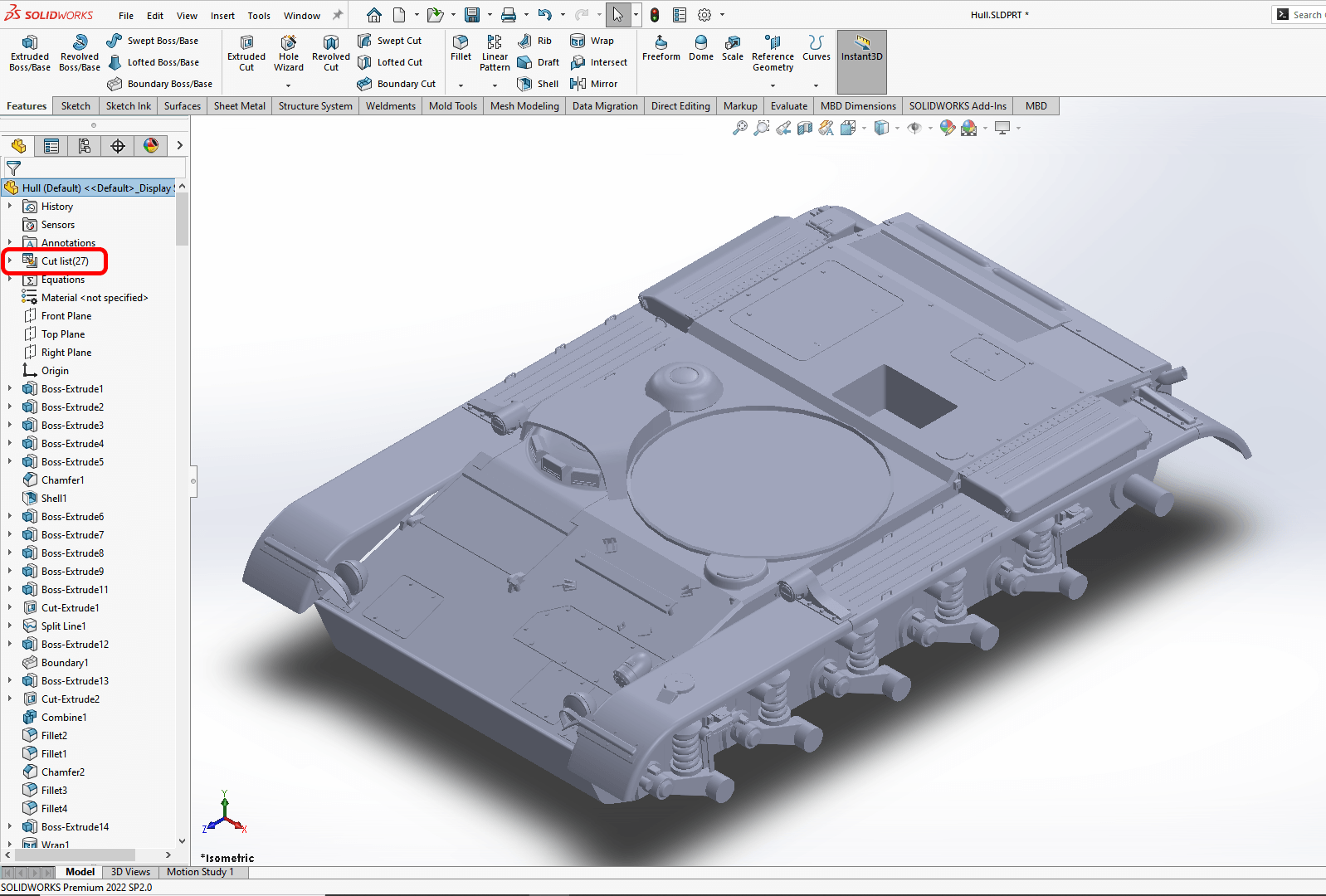 5. To make Molds: More often than not we have to break our part into multiple pieces so that it can be mass-produced using molds, etc.

6. Design Requirements: Let’s say you need to design a spoked wheel and you know the requirements of the rim and the axle. However, you do not know how to design the spoke. With multibody parts, you can create the rim and axle, then create the spoke to connect the bodies. 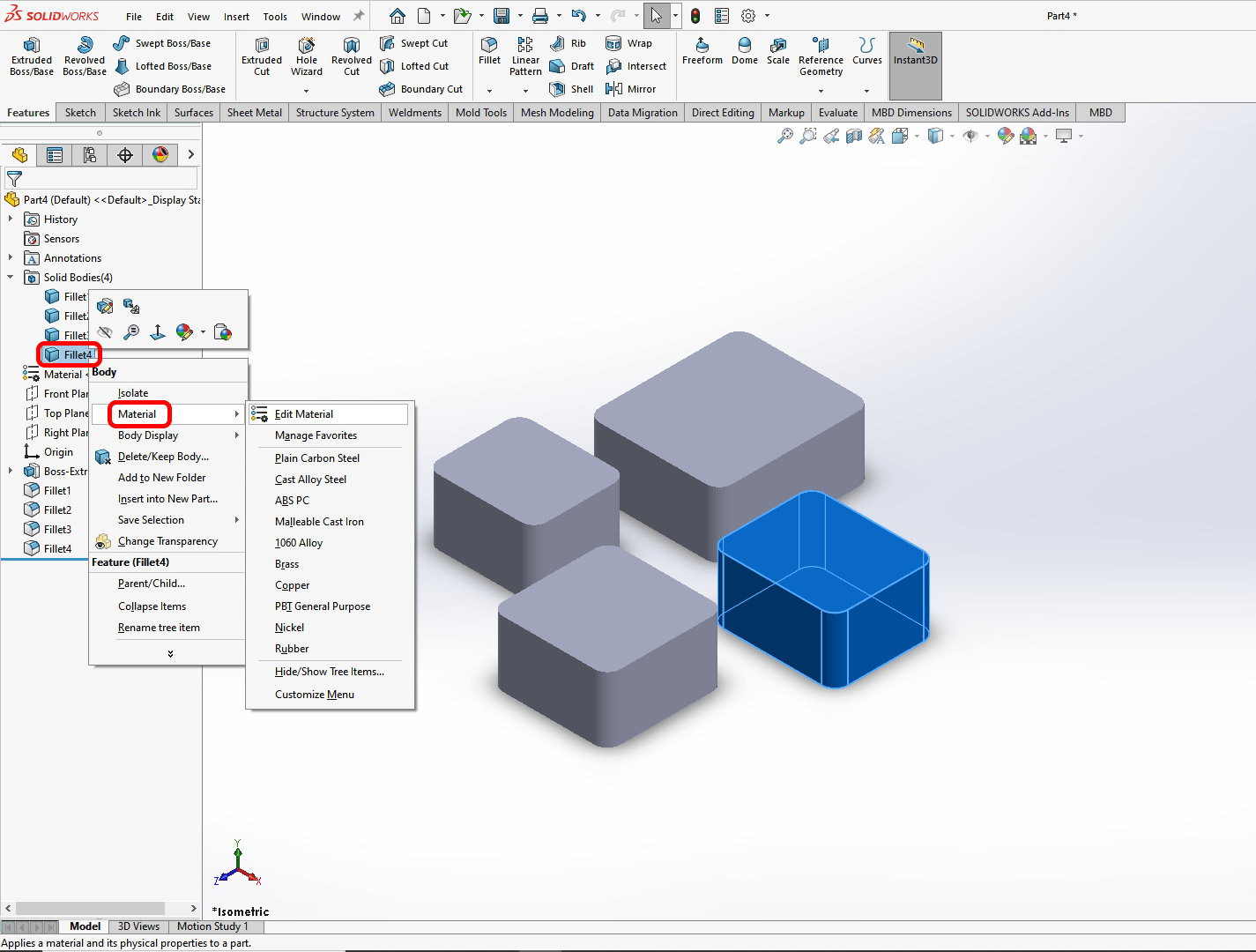 You can also add different appearances to each and every solid body as per your liking.

8. To fix Zero Thickness Error: In case you get a Zero thickness error while using a Boss/Base, you may want to make a multi-body part in order to be able to use the Interference Detection tool so as to find where the Zero-thickness geometry is located. Read More… 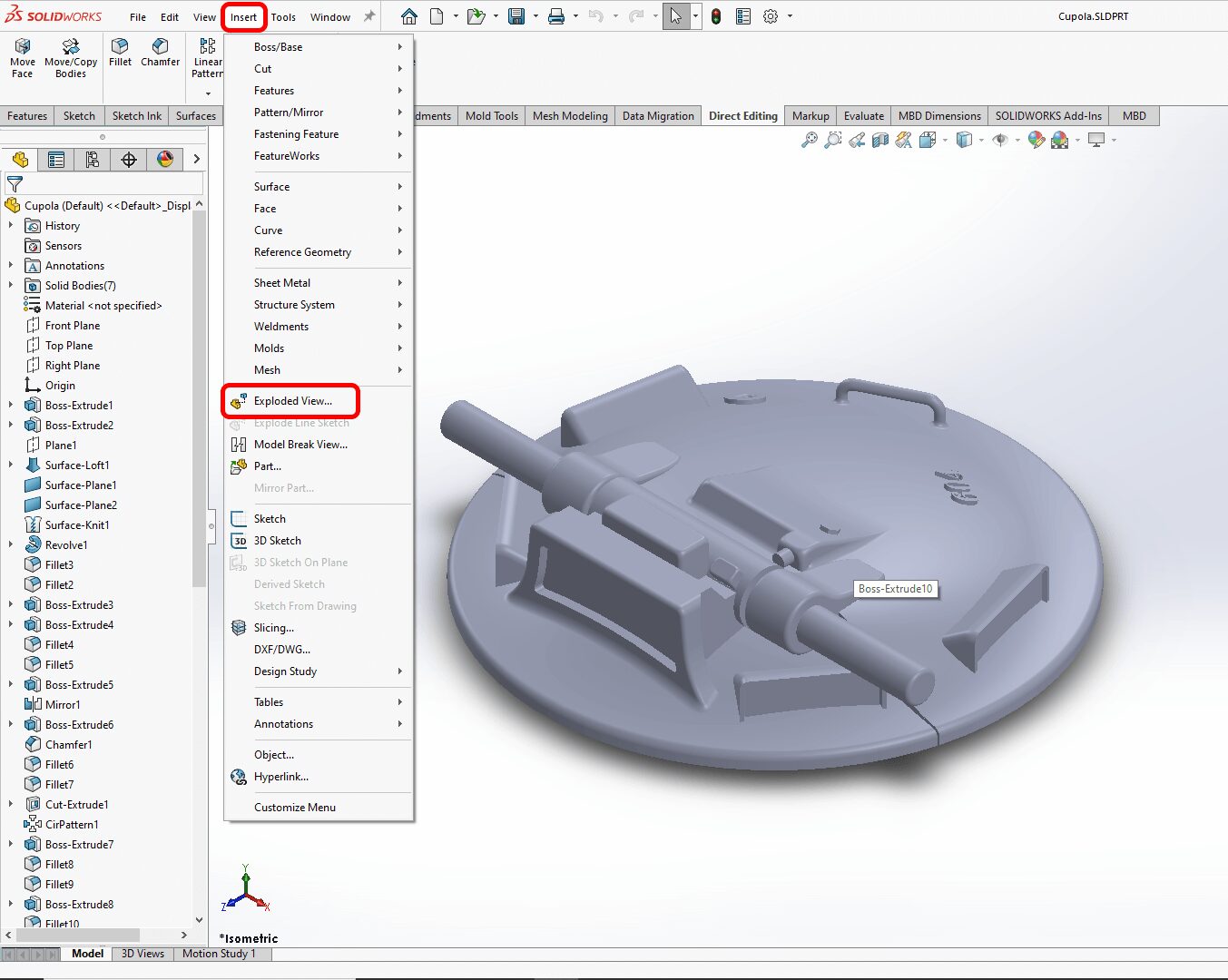 10. To create assembly directly from the part file or to save different bodies of a Multi-Body part file separately: You can use a Multi-body part file to automatically create an assembly file that will contain all the solid bodies in it arranged in the same way as they are in your part file. These bodies will be fixed in place but you can float them and then add any mates if required. This is very useful when making complex designs or when preparing part files for molds. Go to Insert -> Features -> Save Bodies or right-click on the Solid Bodies folder and select Save Bodies. 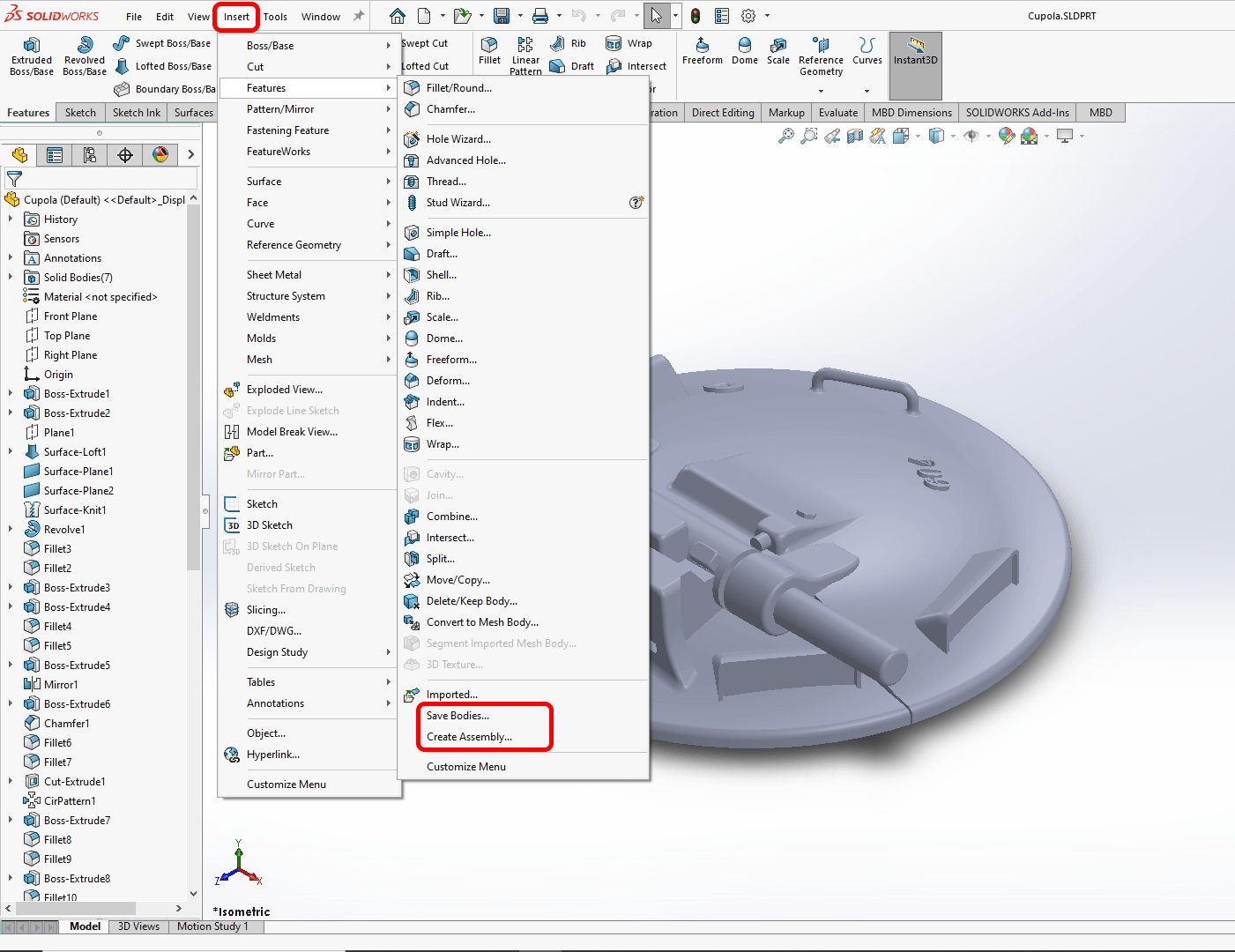 11. Allows you to perform boolean operations for making complex model geometry: You can use the boolean operations such as adding multiple bodies, subtracting bodies from one another, or keeping only the common part of the bodies. You can access these boolean operations using the Combine tool present in the Direct-Editing toolbar or go to Insert -> Features -> Combine.

See also  How to use SolidWorks Intersect Tool?

12. All bodies in a Multi-Body part file are present inside one file: This makes sending and managing files easier and more convenient.

And there are many more reasons why you should make a Multi-Body part file. Listing them all is beyond the scope of this article.

How to create a MultiBody part file?

You can create multiple solid bodies in a single file with the help of the following methods:

1. By using Boss/Base and Cut commands:

While using the Boss/Base mode of these tools to model your geometry you have the option of Merge results (this option is only available when there is at least one solid body present already). If you uncheck this option you will find that the geometry that has been created by the feature is not merged with the existing body and is now created as an individual body. 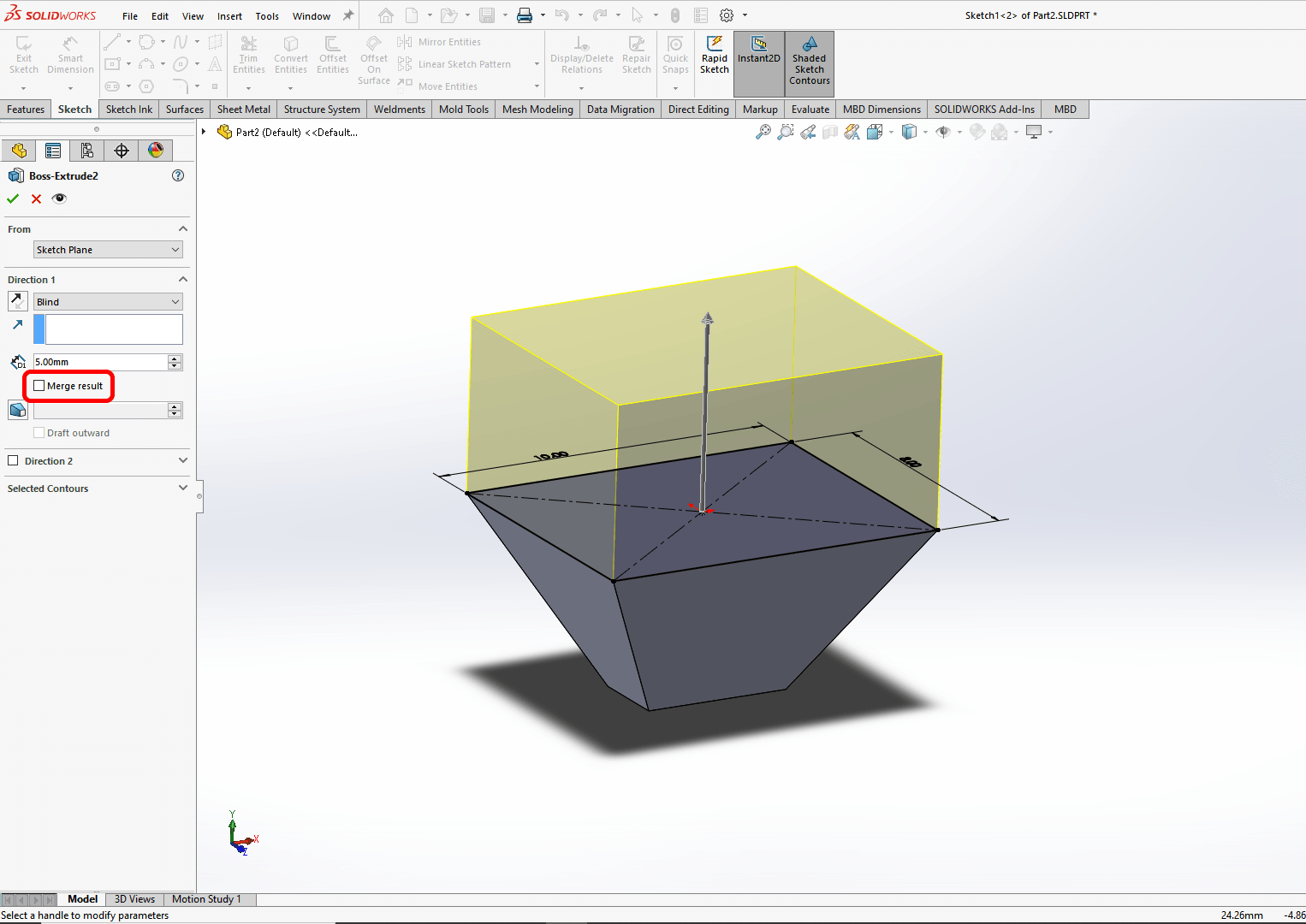 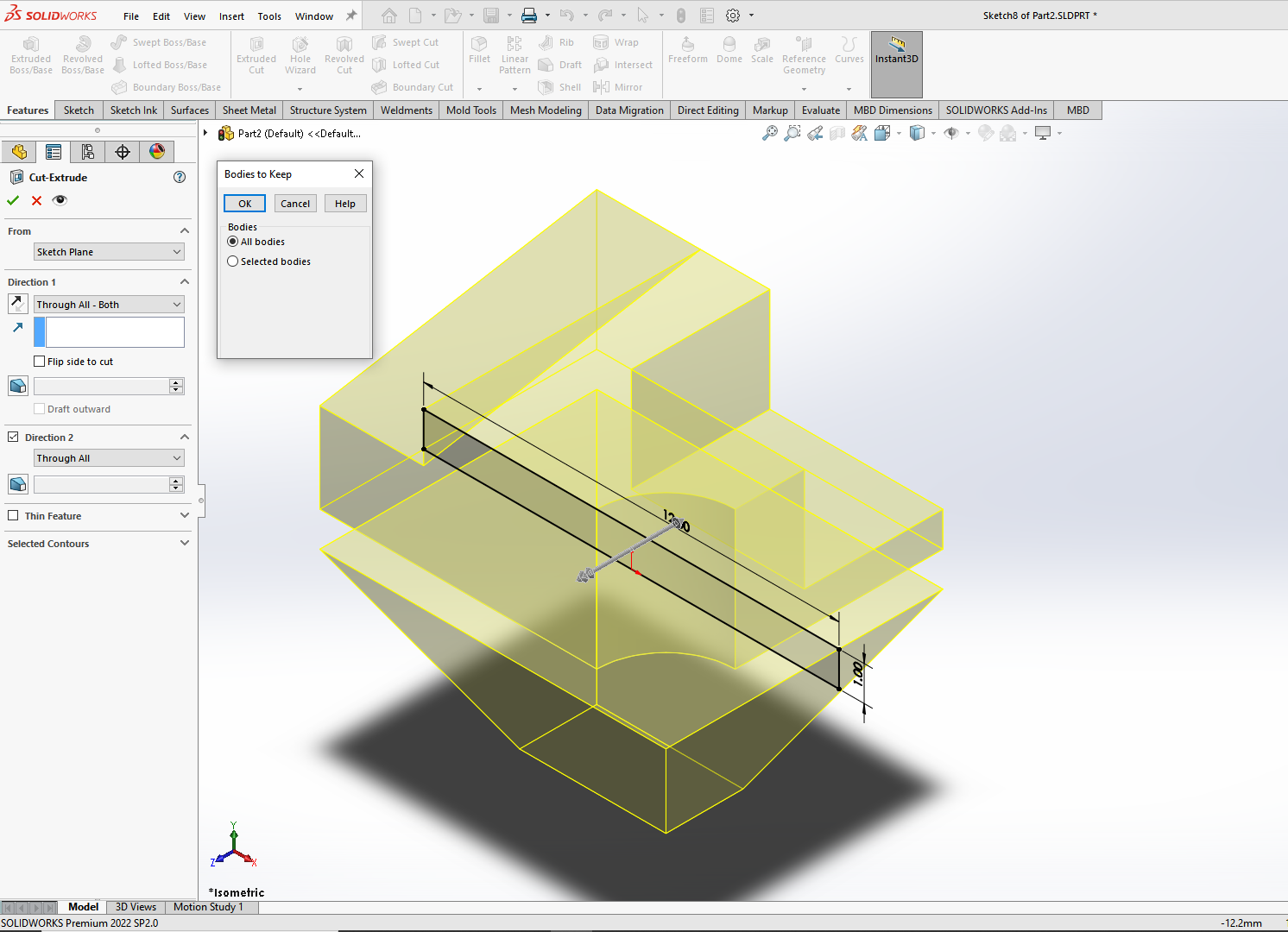 3. By using the Split command:

This tool is extensively used to split a single body into multiple bodies. Go to Insert -> Features -> Split or select the Split tool present in the Direct Editing toolbar. Read More…

4. By inserting an existing part:

Insert Part command present in the Insert menu is used to insert an existing part file into another part file. In multibody parts, you can precisely place bodies using mates. Mates such as Coincident,  Angle, Parallel, Perpendicular, Concentric, Tangent, and Distance are available. 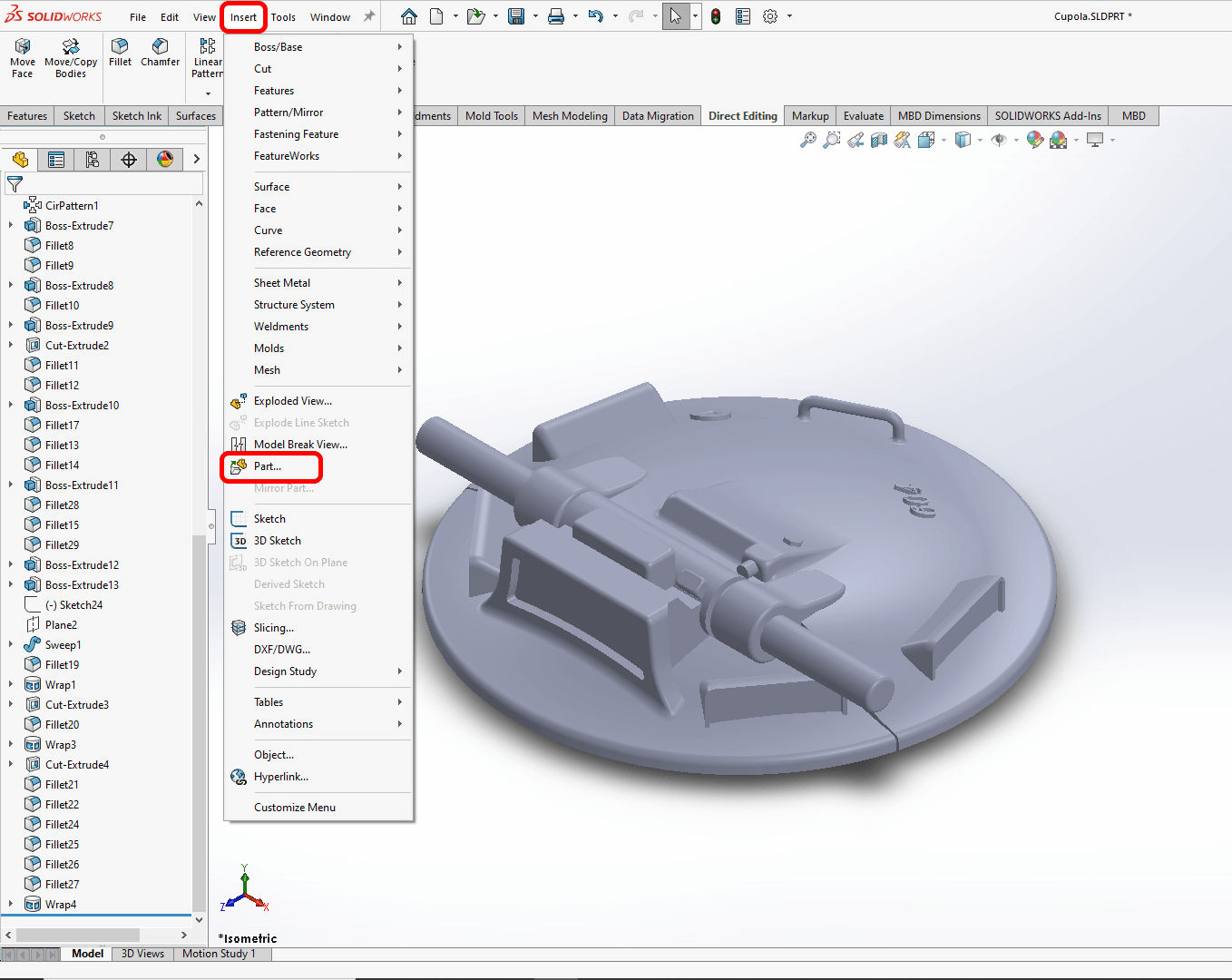 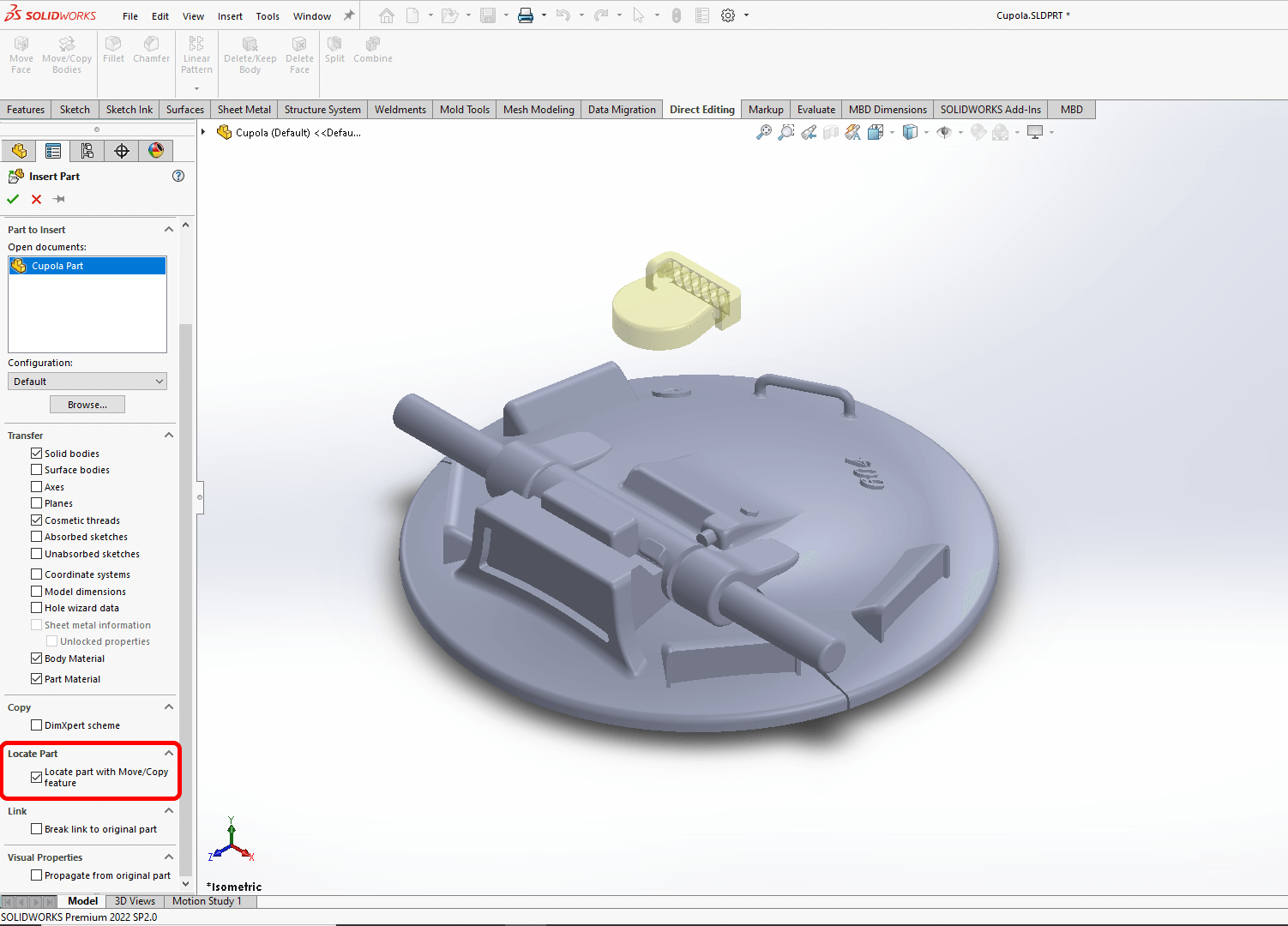 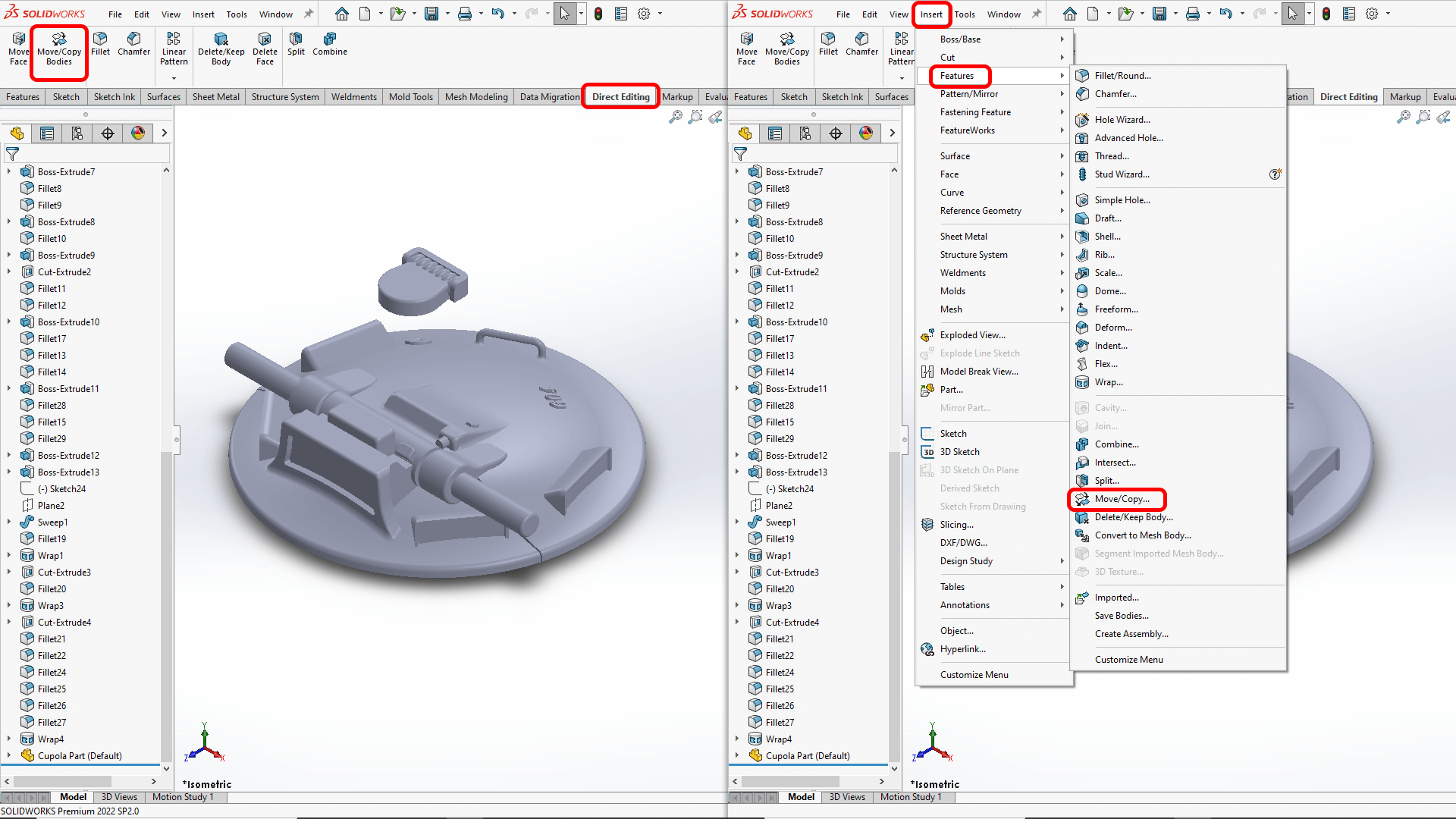 Then select the Body that you inserted in the Bodies to Move/Copy box and then click on the Constraints button to add as many mates as you want or use Translate/Rotate button to manually position the body. 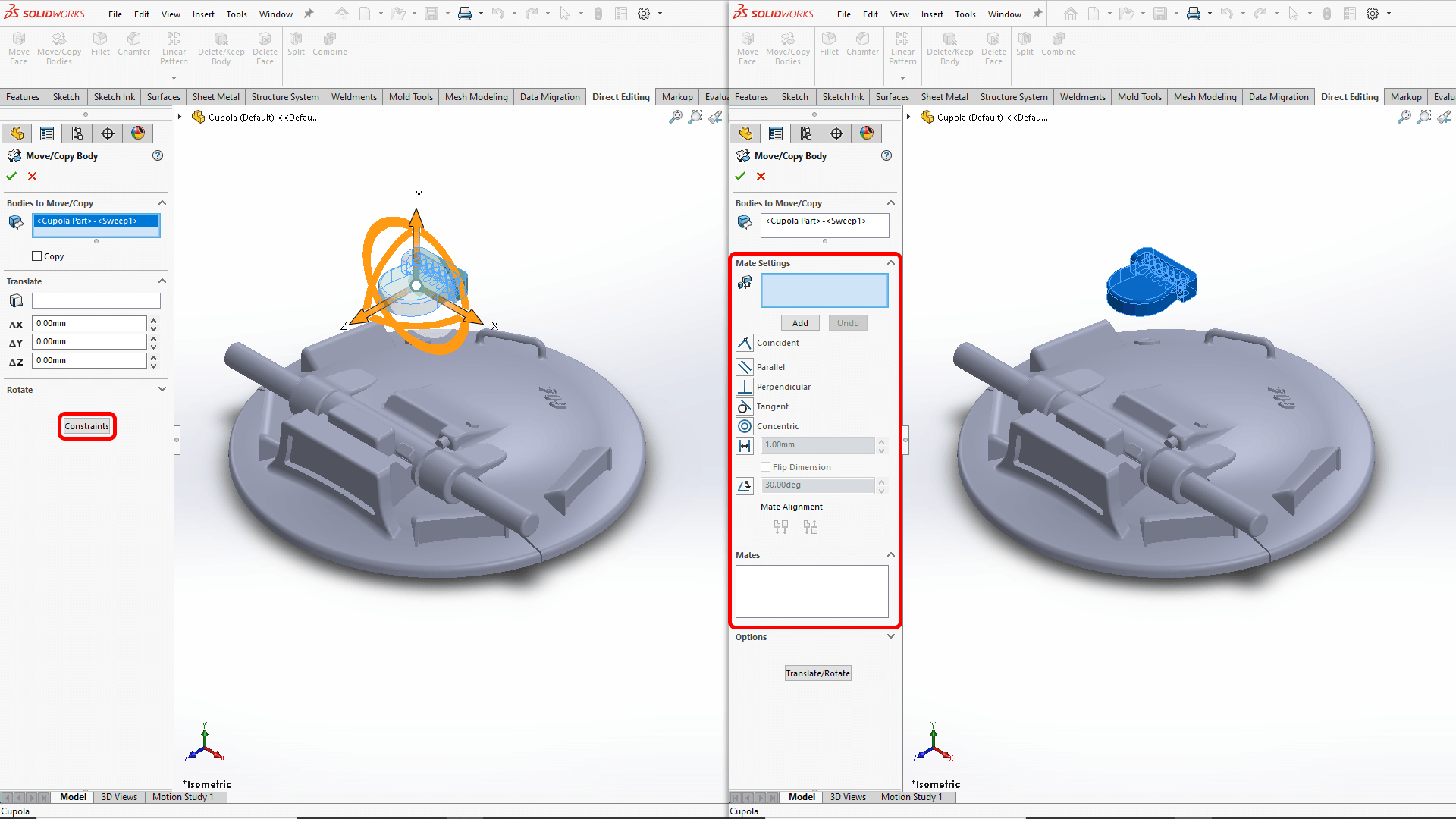 5. By saving an assembly as a multi-body part document:

Saving a complex assembly as a part file can be useful in various situations. Like if you want to scale a complete assembly. Or when you want to share your assembly but don’t want to risk design integrity by sending each and every internal detail. So instead you can select a few of the outermost components to be included in the part file which in turn also reduces the size of the part file.

To save an assembly as a multi-body part document:

What is the Feature Scope?

See also  How to Link Dimensions in SolidWorks?

Tip: If there is no Feature Scope present during a Boss/Bass feature make sure that the Merge Bodies/Merge Result option is checked in the feature’s PropertyManager.

Feature scope is used to specify which bodies will be affected by the feature you are creating. There are 2 options available under the Feature Scope menu.

Notice how all 4 of the squares are cut by the Cut-Extrude tool. All Bodies option regenerates the entire model, hence sometimes it is a bit slower. 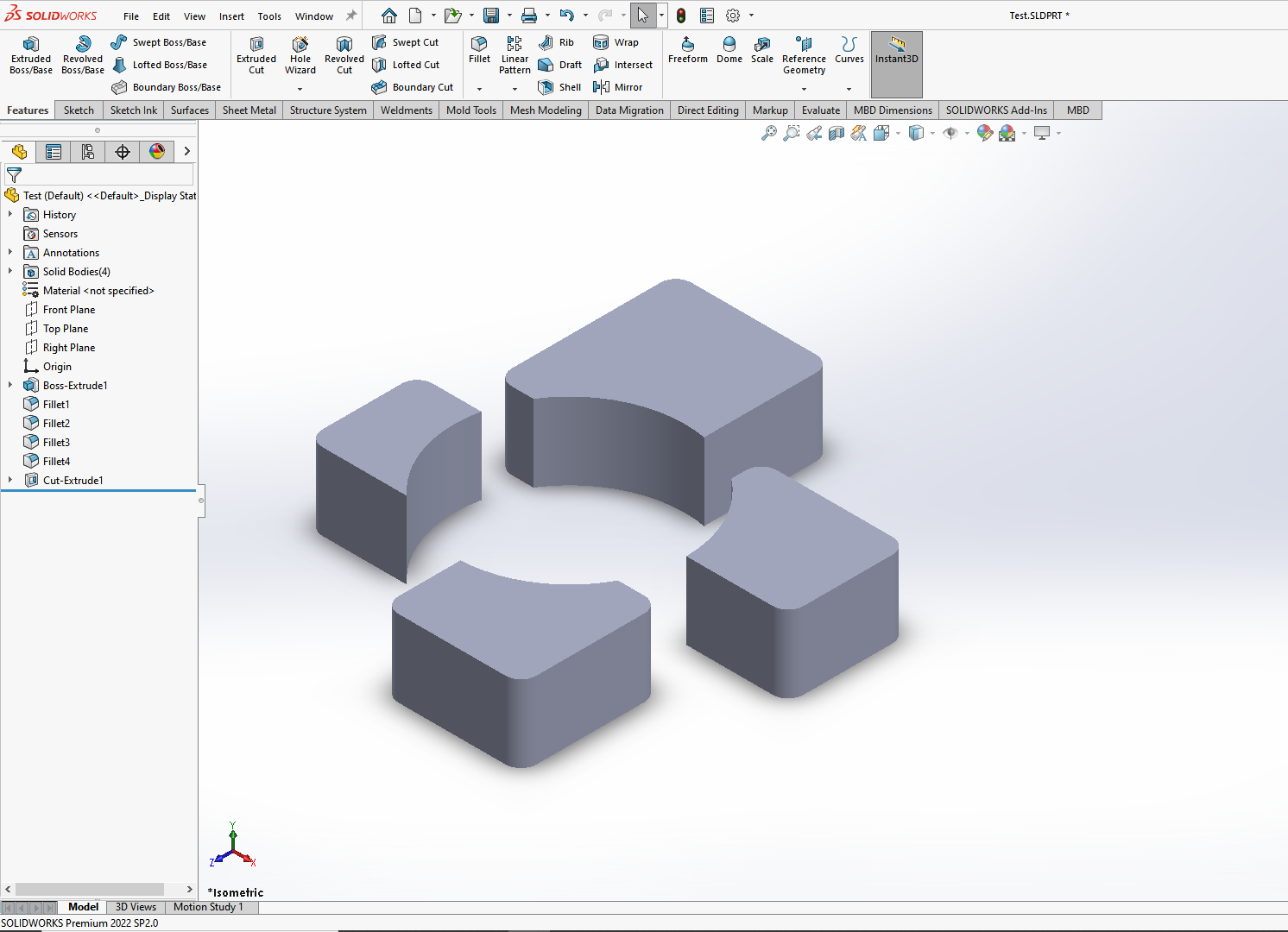 If you are using a Boss/Base Feature, this option will merge all the bodies that are being touched by that feature. For example, if we were to perform a Boss Extrude instead of Cut in the above example, the Boss-Extrude feature will create a cylinder while merging all 4 squares with it and leaving us with only one solid body.

Auto-select: At the time of creation, the feature automatically detects all the intersecting bodies and selects them for you. Auto-select is faster than All bodies because it processes only the bodies on the initial list and does not regenerate the entire model. If you want to manually select the bodies that you want the feature to affect then you have to clear the Auto-select option.

Solid Bodies to Affect: You can manually select the bodies in the graphics area that are going to be affected by the feature and those bodies will be highlighted in green. 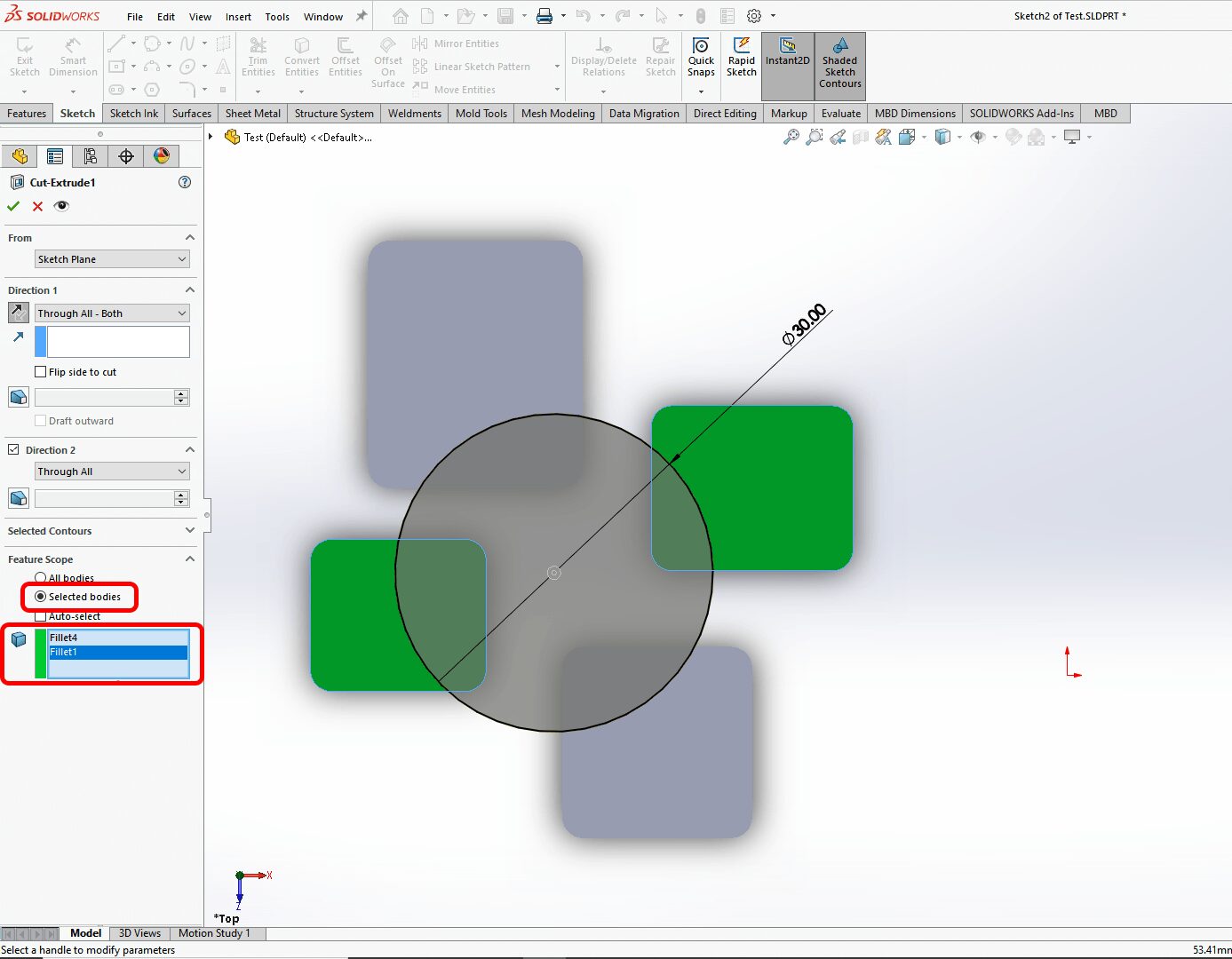 Notice in the final image below how the Cut-Extrude feature cuts only the two squares that we selected and left the other two as they were. 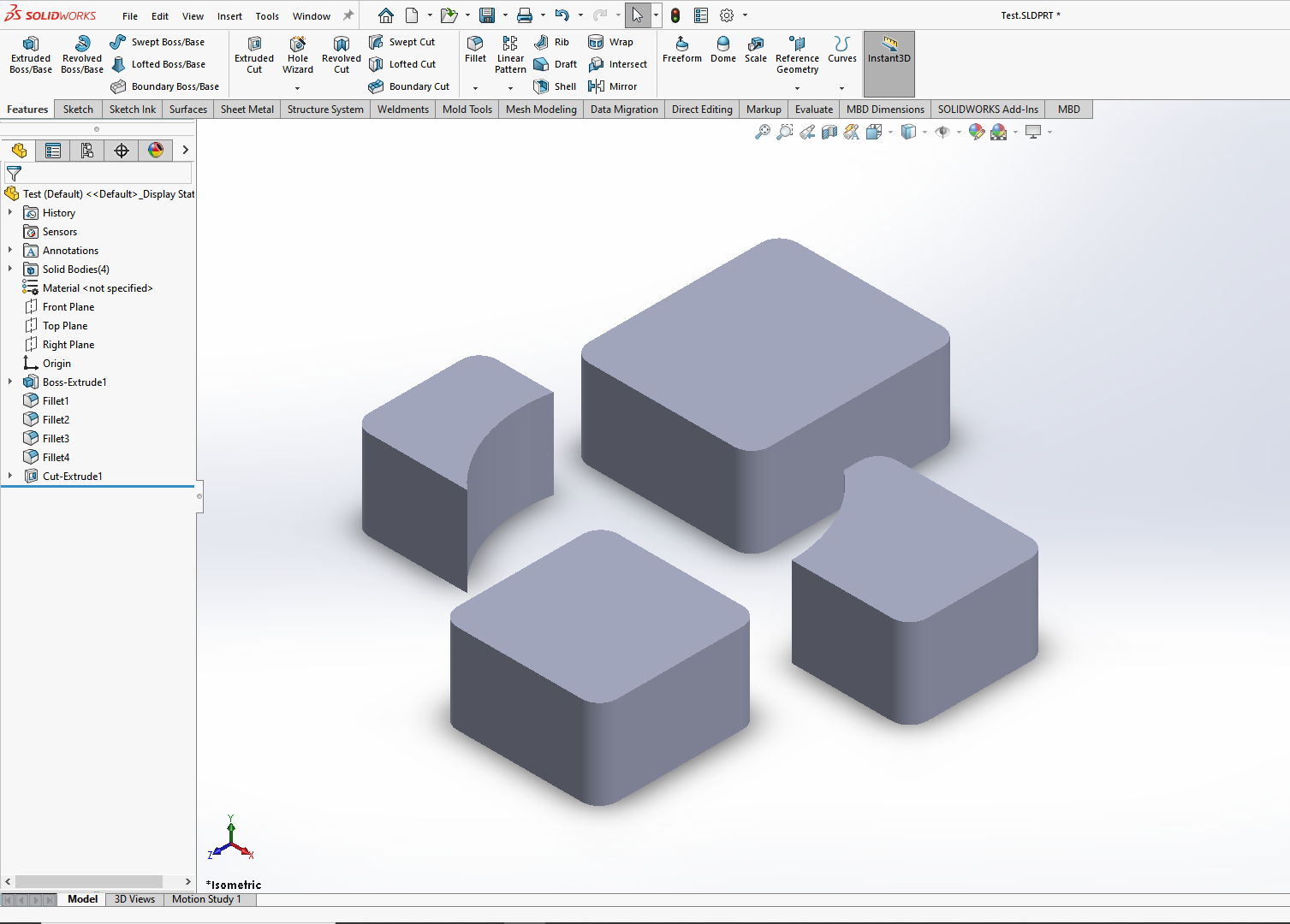 If we were to create a Boss-Extrude in this example, the cylinder will only be merged with the two squares we selected and we will have a total of 3 solid bodies.

Tip: Most beginners do not pay attention to the Feature Scope while adding features and then they end up with either more or less solid bodies. So if you are working on a multi-body part make sure to define this option every time you make a new feature that requires Feature Scope and keep an eye out for the number of solid bodies you have in your part file.

And that’s it. We hope that this article provided you with all the important information you needed to work on a multi-body file in SolidWorks.