In this tutorial, we will be looking at how to make a knurling pattern in SolidWorks. Knurling is an idea to give gripping strength to small or large surfaces. This is for to making cylindrical bars for gyms and much more. Electric scooters have a throttle shaped with a knurling feature for improved grip of the thumb. Now let’s jump right into today’s tutorial. We will be looking at a part which is cylindrical. 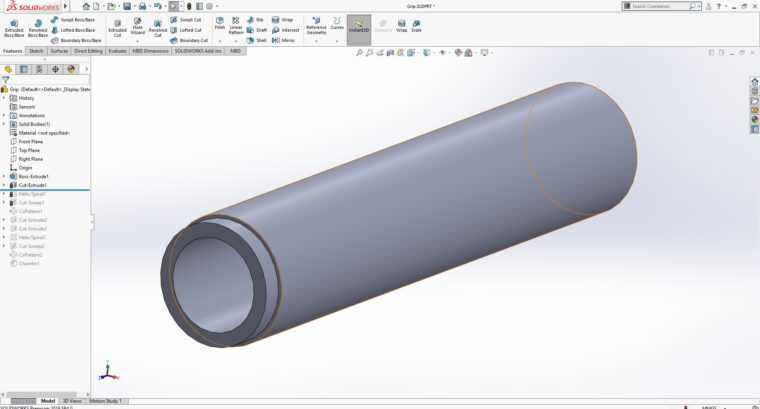 The first step in knurling is to make a spiral in a clockwise direction with a radius. This spiral is responsible for dragging a sketch along that spiral to create a feature which will in the end make the knurling feature. To make the spiral, we must sketch a circle to give a radius for the spiral. After that, go to Curves in the CommandManager and click the last option Helix and Spirals. 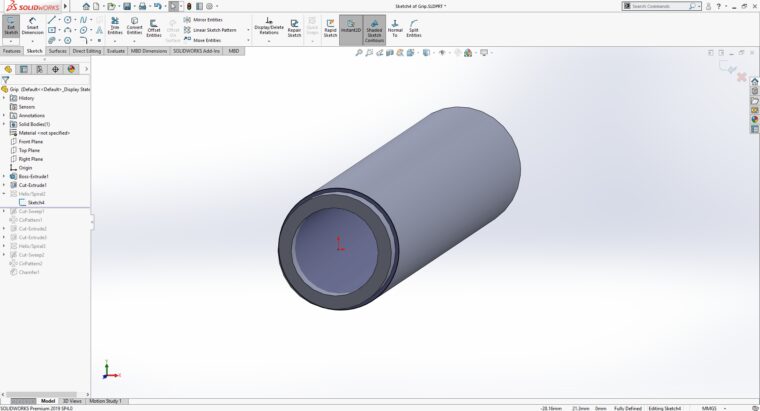 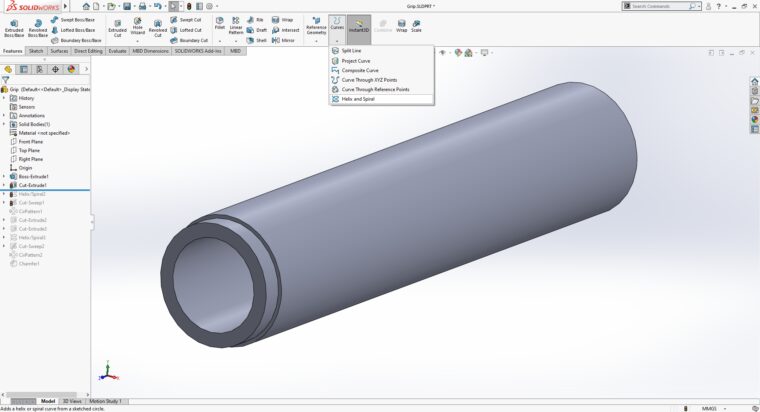 This will open up the options for making a spiral. We just want a normal spiral. Select the Height and Revolutions option in the first one. Second is the Parameters tab where you select Constant Pitch. Then the input the length of the cylinder in the Height parameter. Set the revolutions to 1. Leave the start angle at 90. The rotations should be set to clockwise. Check the green tick mark. 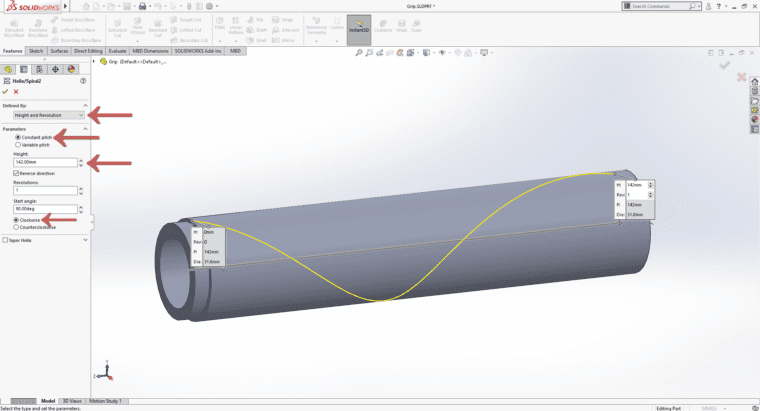 Now proceed to do this same step but on the other opposite end of the cylinder. Sketch a circle first and then use the spiral command but choosing the counter clockwise option in the second spiral. Two spirals are now created.

See also  How to Use Prpsheet in SolidWorks? 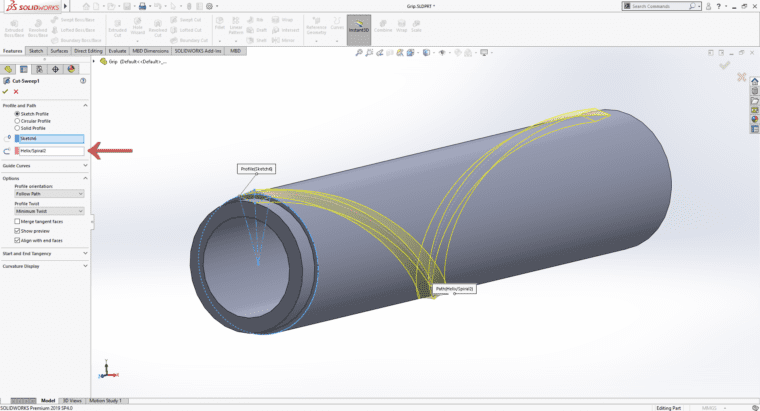 After cut sweep command, we will Circular Pattern this cut sweep to cover the whole body as shown below. This is our ultimate goal. The clockwise cut sweep is complete. 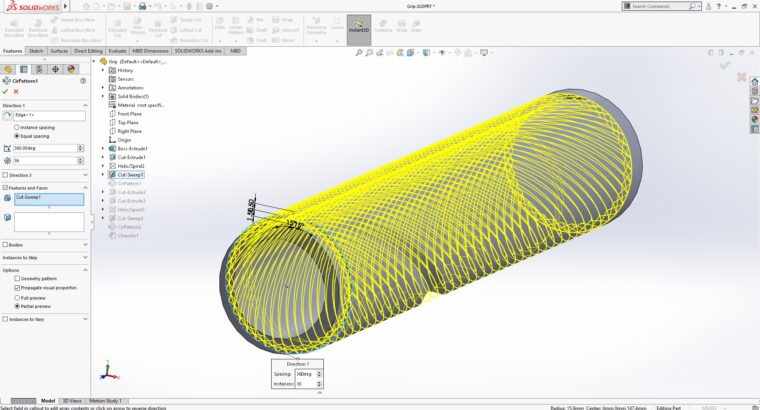 Now we repeat the same with the other side but with the counterclockwise helix. The diamond sketch will be the same and the cut sweep and circular pattern will produce the knurling shape as shown below.

See also  How to do a Horizontal Break in SolidWorks? 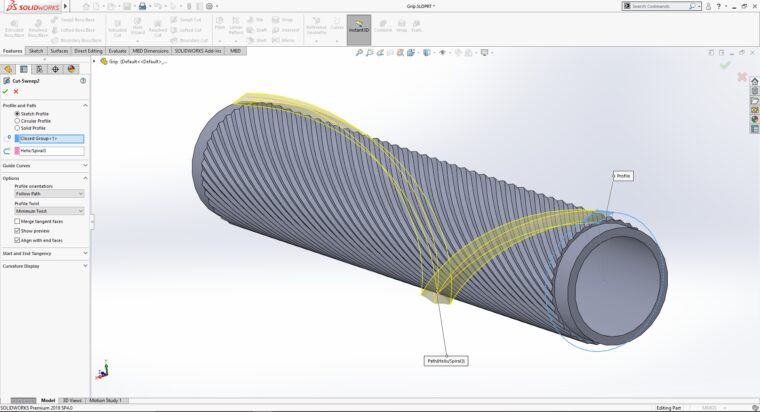 We continue to make the circular pattern on it by the following image. 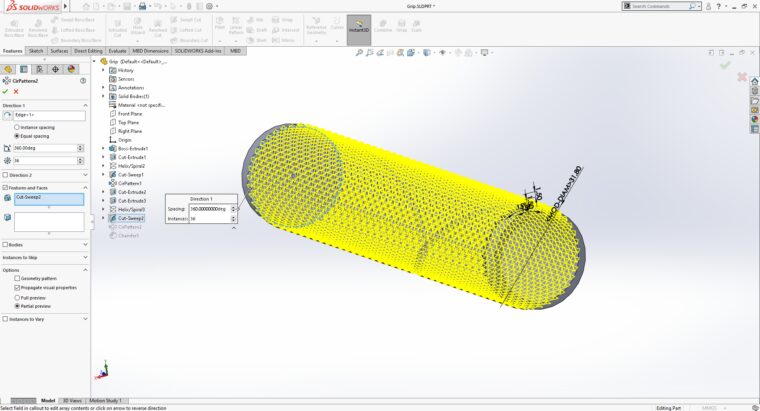 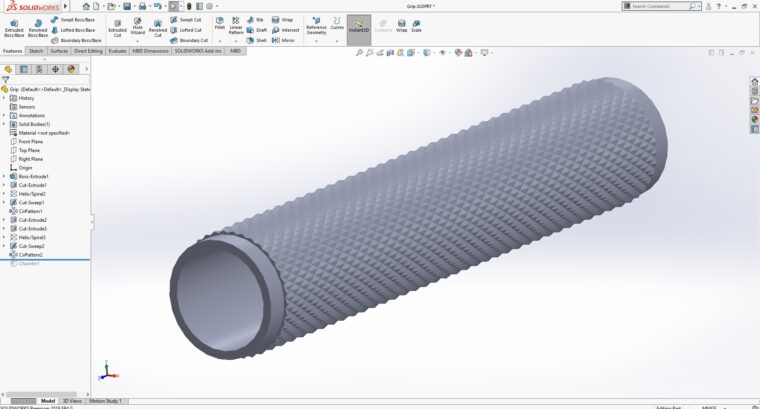 This is our final product. It is a knurled cylindrical bar. Hope you liked this tutorial and come back for more!