In this tutorial we will be discussing the relatively simple feature extrude cut and a bit tricky one, the extrude feature itself. Now coming to the first one, it is very easy to implement. For example, you can take the assembly shown below. It is a lathe chuck with 3 jaws. To extrude cut in this assembly, we simple select a face to sketch, sketch it and extrude cut it. Its really quite simple. Just follow the example below.

As you can see all we wanted was to create a sort of aesthetic circular cut into the lathe as a signature. This can be done for a lot of diverse purposes such as editing and removing material in context of the assembly. That way we have a firm grasp on how much material we need to remove and validate our designs. It truly is a remarkable thing to use and very handy. Onto the next one!

In SolidWorks, some features are unavailable in some file types or formats. One of these examples is the extrude feature in the assembly file. You find yourself struggling to make this box lid or a hook off of a face but want to do it in the assembly. There are workarounds for everything using the right commands. First option would be to edit the component in the assembly. It will still show all the other components for reference so you know how the prroduct will look. Having solid vision of the product is essential for design and aesthetics well. But there is another method to do all this. That is to make a new part. You’d think that this opens up new difficulties for you but that is not the case.

The new part is going to actually be the extrude we want to implement inside the assembly. This is often called editing in context of assembly. To implement this, we will take the example of the following lathe chuck. Consider we want to add something or a profile on one of the faces. Click that face and proceed to add New Part as shown in the picture. We are resorting to this method as the extrude command is unavailable in the assembly file. You can only use the extrude cut command in Assembly.

See also  How to mirror an Assembly/Sub-Assembly in SolidWorks?

Once you click the empty space, a new part by the name of part1 will appear in the design tree on your left. Now you can click edit part and then do the extrude feature as that will allow you to create a whole new part all by yourself on top of the body which is already assembled. This is why there are workarounds which enable us to edit and add functions onto assembled parts.

First we choose a face to sketch which is already in highlight of the color blue. A point to note is that we are actually editing the new part we just made. That is why in the top left corner we see the Edit Component highlighted.

See also  How to copy a part in SolidWorks assembly? 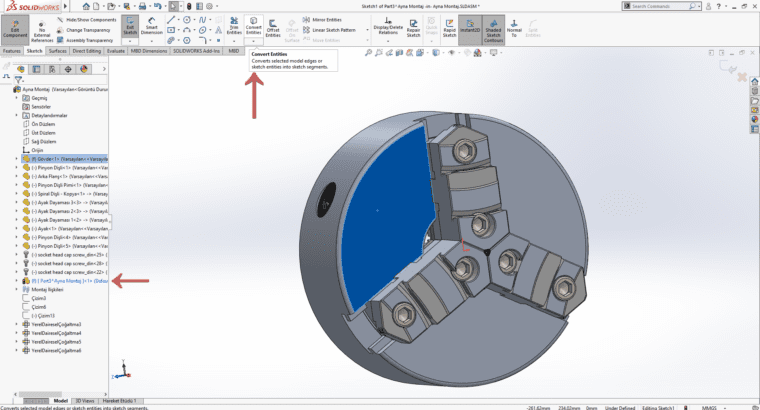 Then we convert entities with the intent of making a cover onto the face. Click okay in sketch to proceed.

Go to features next. Extrude it to the desired result and click the opt out option for closing the editing in assembly.

Now you can extrude in the assembly as well as cut extrude as an assembly feature in SolidWorks. Whenever you need more content to read, be sure to go to mechanitec for more content. See you guys later!