While making changes to a model is an everyday occurrence in SolidWorks, to see the changes you have made, there is an action you have to perform. That action is called “Rebuild.” The traffic light icon will likely appear next to your feature on the FeatureManager Tree if you’ve ever made a dimension change, which I’m sure we’ve all done. In other words, this feature still needs to be rebuilt, so instead of updating immediately, Solidworks is waiting for you to start the rebuild process in case you want to change any additional dimensions before the complete Rebuild. By pressing (CTRL+B), you can create a rebuild that aims to recreate newly added or modified features and the children’s features that go along with them in part. While using SolidWorks, you might occasionally notice the rebuild icon next to some of the SolidWorks features. This icon indicates that for the dimensional changes to take effect, SolidWorks must rebuild the model. The assembly can be “rebuilt” using the rebuild option in the same configuration when the SolidWorks application saved the assembly. This feature was implemented when transferring part files between computers to fix design issues. The rebuild icon might be next to some of the features in SolidWorks. Learn more about how the rebuild works in SolidWorks operates by reading on.

A model is rebuilt after changes are made to update features and check for errors. Numerous tools are available to rebuild parts, assemblies, drawings, and sketches. For the model to be rebuilt:

Rebuild can be accessed by clicking Rebuild on the Standard Toolbar, selecting Rebuild in Edit, pressing Ctrl + B, or using any of the keyboard shortcuts mentioned above.

The design features that have changed since the last rebuild are the only ones that the rebuild function rebuilds. Ctrl + Q will rebuild all features. Depending on the complexity of your model, this process might take a lot longer. The part does not rebuild when you reorder an imported feature or any other feature without a parent or child; instead, the FeatureManager design tree rebuilds.

SolidWorks Rebuild Types and How They Work

SolidWorks offers users various ways to rebuild models and designs in the SolidWorks application. You can check the list below to learn how rebuild works in SolidWorks.

1. Rebuild: This command allows users to rebuild changed features. For parts models, assembly, drawing, and sketches use the keyboard shortcut Ctrl + B.

2. Rebuild All Configurations: This command allows users to rebuild changed features in all configurations. For part models, assembly and sketches, use the keyboard shortcut Ctrl + Shift + B.

3. Force Rebuild: This command allows users to rebuild all features forcefully. For part models, drawings, and sketches, use the keyboard shortcut Ctrl + Q.

4. Force Rebuild All Configurations: With this command, users can forcefully rebuild all features in all configurations. Use the keyboard shortcut Ctrl + Shift + Q for part models, assembly, and drawing.

5. Force Rebuild Top-Level Assembly: This command allows the user to rebuild all features in the top-level assembly. You can also use the shortcut Ctrl + Q to use this command. 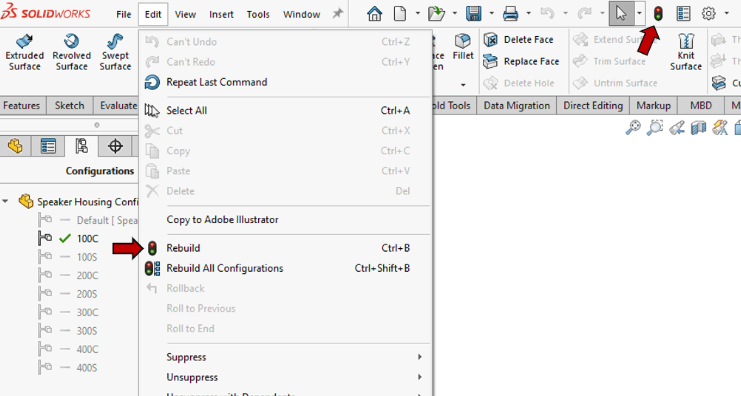 The system might not detect a warning or error in other features that could be impacted by the changes since the standard Rebuild commands only rebuild the parts that have changed since the last save. The entire geometry database is refreshed when the Force Rebuild command (Ctrl + Q or Ctrl + Shift + Q) is used to rebuild every feature in the FeatureManager Design Tree. It is impossible to run the Force Rebuilds command using an icon or menu item, and using the keyboard shortcuts is the only way to launch a Force Rebuild.

A checkmark appears in front of the designs when multiple configurations in a part or assembly file indicate the rebuild status. The structure is successfully rebuilt when the checkmark is green, and rebuilding a red X indicates errors. To identify the mistakes, switch to the FeatureManager Design Tree. 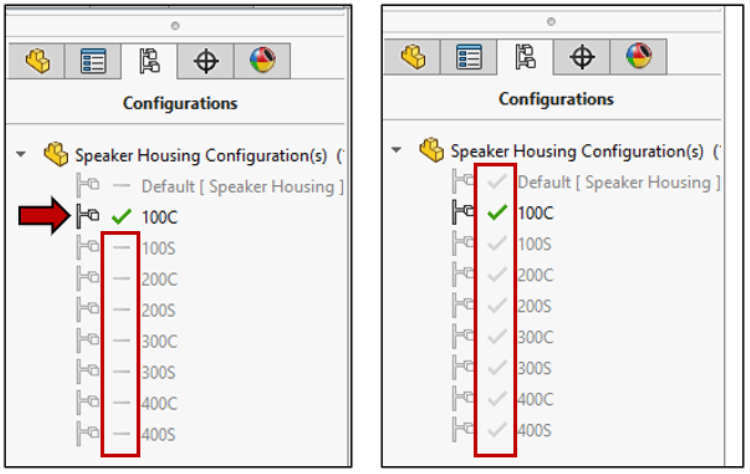 You can add a “Rebuild on Save Mark” to all configurations or just a few. The system will then rebuild the specified designs each time the file is saved.

The option to Rebuild on Save Mark is present in front of the configurations as a disk icon. Keep in mind that lengthening the saved time by rebuilding each design model separately. File size may also increase because numerous structures are all rebuilt with the necessary data. You should conduct the required testing to ascertain how this impacts your design for specific arrangements that you know could be affected by changes made while designing. Put the rebuild on Save Mark, if you please. 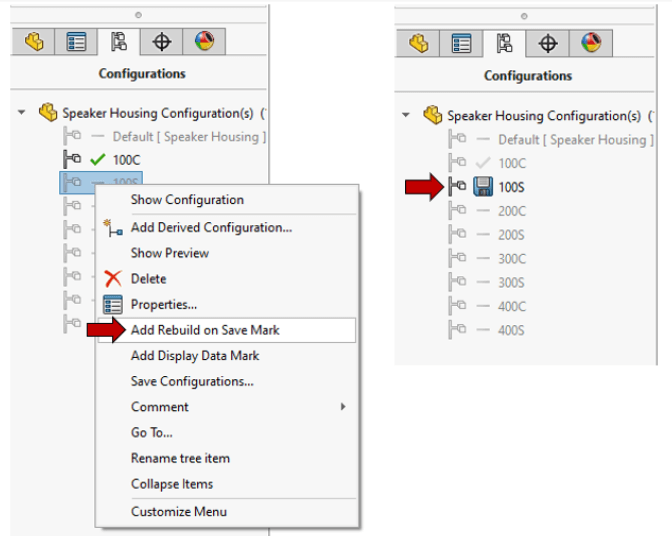 The model will typically be updated and checked for errors after a standard rebuild or forced rebuild. One more option exists if you’re working with intricate surface or sheet metal models; this option might reveal more rebuild problems.

By default, rebuilds only compare every new or modified feature to nearby faces and edges. In addition to finding problems in most models, this enables quicker rebuild times. It is a good idea to carry out a thorough error check to ensure that all components are rebuilt without errors when working with complicated models and surfaces.

Select Options under Tools from the menu. To make the model check new or modified features against all of the model’s faces and edges, select System Options, go to Performance, and turn on “Verification on Rebuild (enable advanced body checking).” This option should be disabled after the rebuild is finished because it will reduce performance. If this check is omitted, any geometry issues might become apparent once the model is exported to another format for use by a different CAD or CAM application. 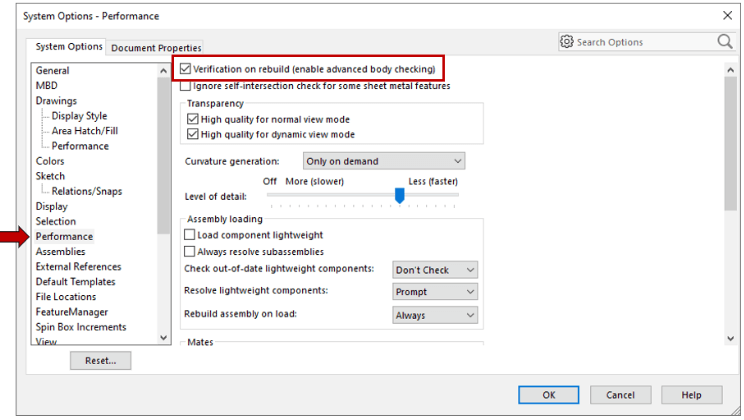 Rebuild is an essential aspect, so it is important to know how rebuild works in SolidWorks. The standard toolbar contains the rebuild toolbar buttons, and you can add the tools to shortcut bars, mouse gestures, and the CommandManager. Many tools are available for rebuilding components, assemblies, drawings, and sketches.