What is Rebuild in SolidWorks?

When working with SolidWorks, sometimes you may have noticed that there is an icon that looks like a traffic light on your feature(s) in the FeatureManager Design Tree. 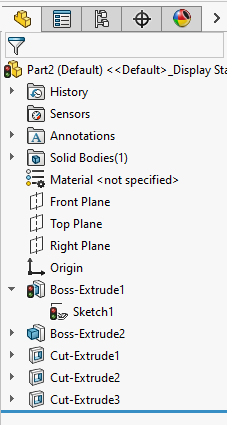 That traffic light icon is called the Rebuild icon in SolidWorks. If you make changes to a sketch or feature that requires to the rebuilding of the part, a rebuild icon is displayed beside the part’s name as well as beside the feature that requires the rebuild. What that means is that SolidWorks needs to rebuild that feature in order for the changes to take effect in the model geometry.

How do you Rebuild your model?

Generally, SolidWorks automatically rebuilds your model as soon as any changes are made. But, if for some reason it doesn’t, click the Rebuild icon present in the Standard toolbar or Edit -> Rebuild, or press Ctrl + B on your keyboard to manually rebuild your model.

Tip: The above methods rebuild only the features that changed since the last rebuild. To rebuild and verify all the features, press Ctrl + Q. It may take significantly more time than the normal rebuild, depending on the complexity of your model but it may help you to detect geometry errors (such as Zero-Thickness Geometry) that may have slipped through.

What are Rebuild Errors?

Rebuild errors are those errors and warnings that you get after your model has been rebuilt (either by you manually or automatically by SolidWorks itself). There are various icons that appear on the Document’s Name present at the very top of the FeatureManager design tree and also on the features/sketches that issued those errors and warnings. These are of two types. Here we will tell you what they mean:

1. Rebuild Error: An icon with a “Down arrow in the Red Circle” indicates that there is an error in the model. A model with an error is not acceptable since it means that one or more of your features failed and hence model geometry is not created or a damaged model geometry is created instead. The name of the part/assembly file will be shown in red color if the file has a rebuild error. An icon with a “Cross in the Red Circle” will appear on the feature that failed after the rebuild. The text of the feature will also be shown in red color.

See also  How to create Weldment cut list in SolidWorks? 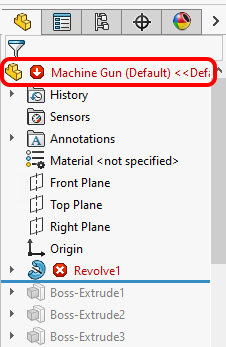 2. Rebuild Warning: A “Down arrow in the Yellow Triangle” icon indicates that there is a warning underneath the node indicated. A model with a warning can be accepted because it just tells you that there are missing references but the model geometry is created. A warning does not always mean that the model geometry is damaged but sometimes it can result in a changed or damaged geometry. If there is a warning, the name of the part/assembly will be shown in yellow color. An icon that has an “Exclamation mark in a yellow triangle” appears on the specific feature that issued the warning. The text of the feature or sketch will also be shown in yellow color. 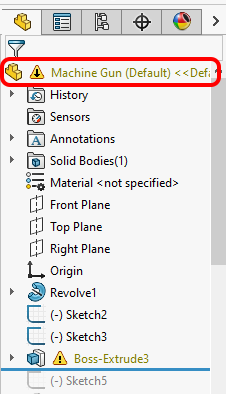 Note: Generally rebuild warning is issued by a sketch, so you may have to expand the feature to find out which absorbed sketch has warned. And as soon as you expand the feature, its warning symbol will change from “Exclamation mark in a yellow triangle” to “Down arrow in the Yellow Triangle” indicating that the warning was raised from underneath that feature node indicated.

If a document or feature has both an error and a warning, the error icon is displayed.

How to fix Rebuild Errors?

Most of the time Rebuild error occurs because you made changes to a feature or sketch that is being used by another feature or sketch. When this happens, SolidWorks will prompt you that there is a Rebuild error or warning. You can click on Continue (Ignore Error) to continue rebuilding or you can click Stop and Repair to stop the rebuild on the feature/sketch that threw the error/warning.

You can also define this in the SolidWorks settings. Go to the Settings icon present in the Standard Toolbar. Under System Options, in the Messages/Errors/Warnings, you will find the option to specify what happens when a rebuild error occurs. 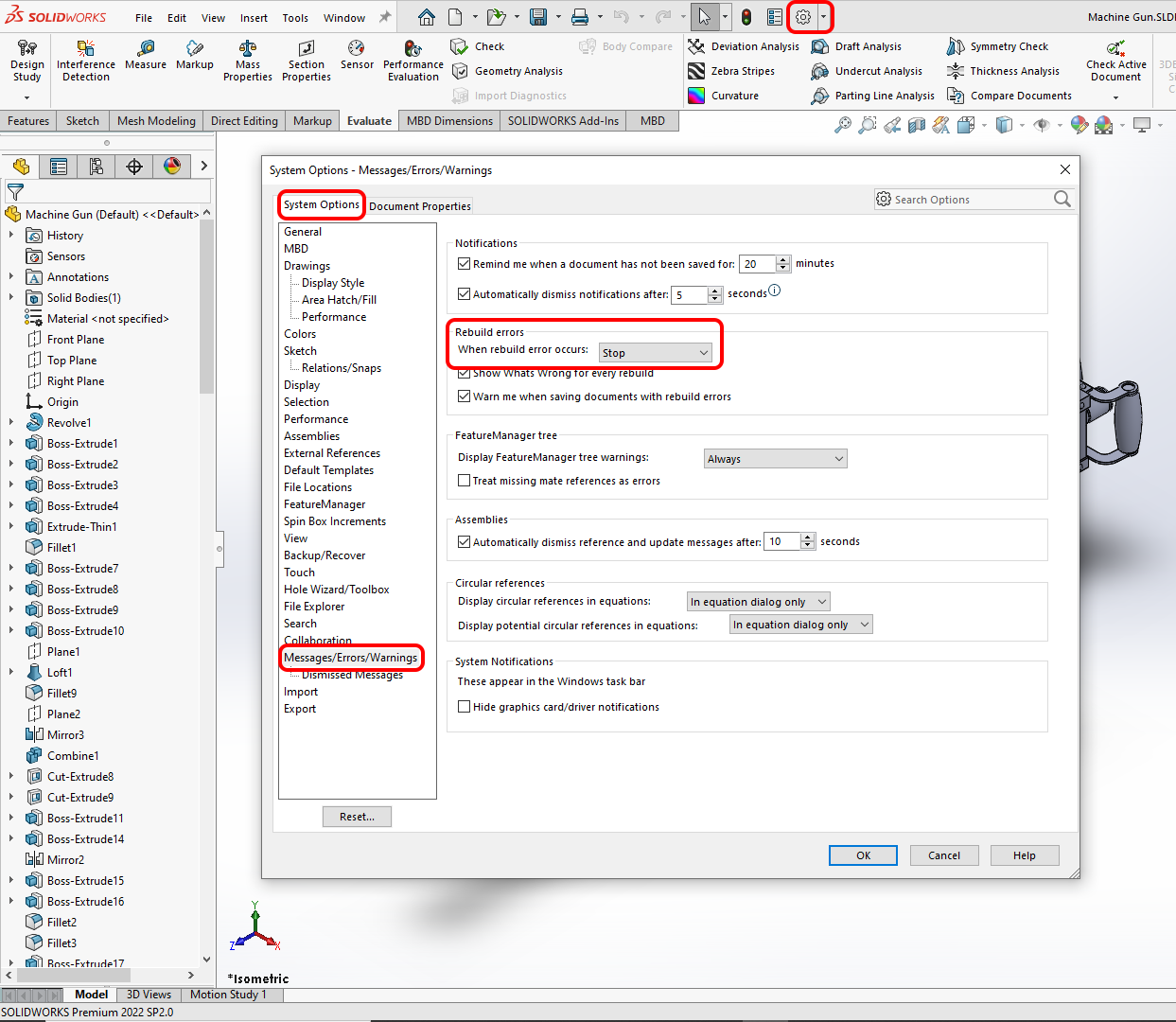 Tip: We would highly recommend you to keep this setting on Stop so that the rebuild process would stop as soon as any error/warning is encountered. If you choose to Continue, then you may find yourself with a long list of errors and warnings because of SolidWorks’ parametric behavior meaning that the Features get rebuilt in the order in which they were made originally. So, the success rate of each feature depends on the previous ones and it is highly likely that if a parent feature failed, then the child features would also have errors/warnings.

If you have a model with a lot of rebuild errors/warnings, we suggest you start from the top of the Feature Tree and work your way down. Often times you will notice that fixing an error high in the Feature Tree automatically resolves errors further down.

See also  How To Create a New Title Block in SolidWorks?

It is recommended that you use the Rollback Bar while fixing these errors. It makes sure that SolidWorks will only rebuild the features that are above this bar so it doesn’t waste time rebuilding all the features every time you fix a single error/warning. It becomes an inescapable necessity if your model contains a lot of heavy features like Sweeps, Wraps, etc. 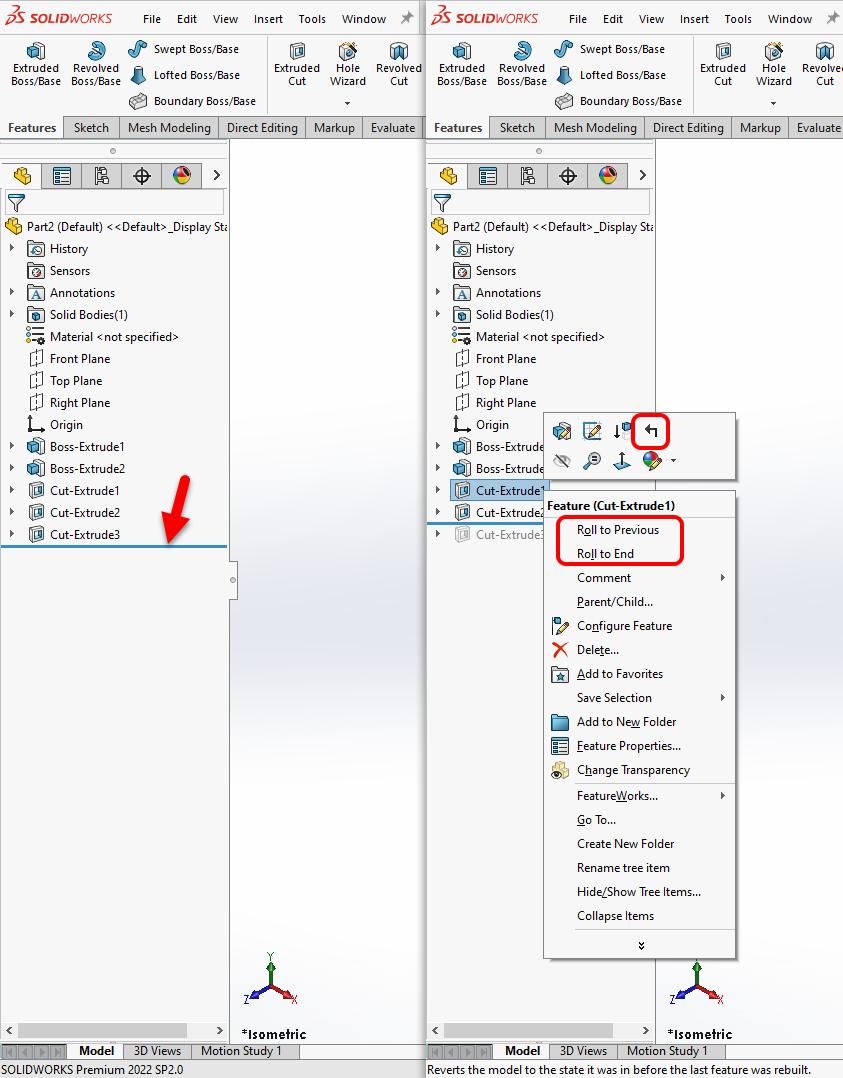 Some general rebuild errors/warnings are listed below along with an explanation of how to fix them:

These types of warnings are generally for dangling relations or dimensions. This means that some piece of geometry has been removed that the sketch referenced from something higher in the Feature Tree.

See also  How To Use Boundary Surface In SolidWorks?

2. Rebuild Warning: The Face or the Plane on which you created your sketch, is missing. 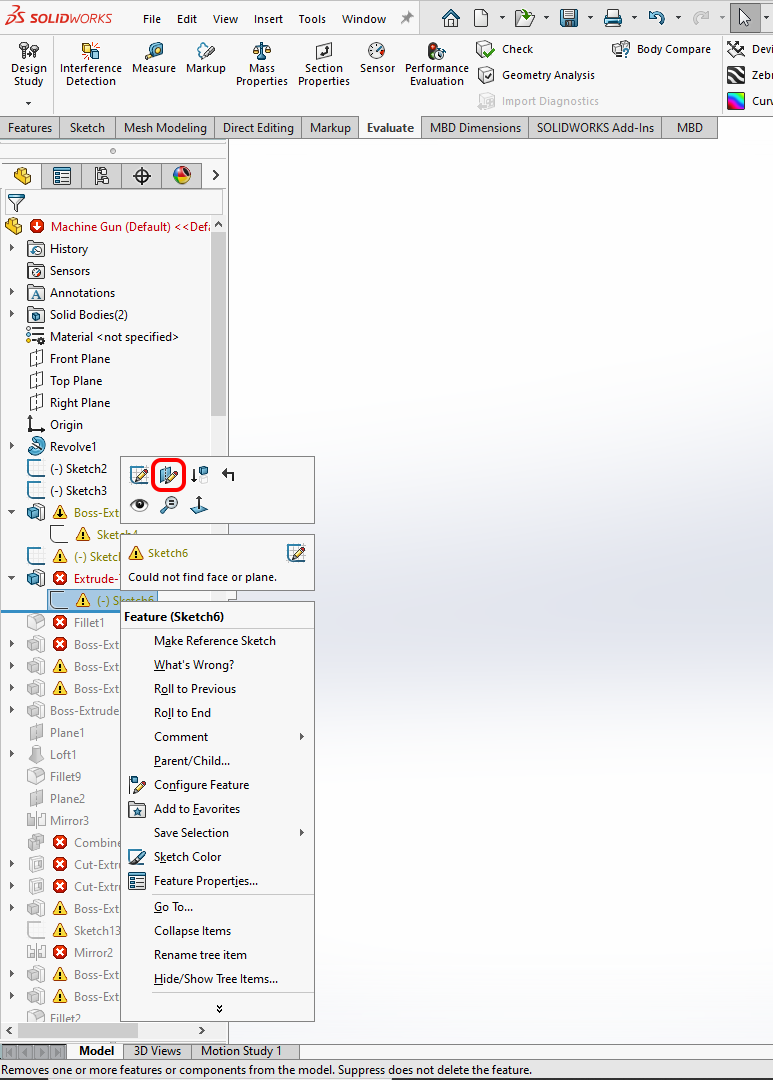 Notice in the above image that under feature scope, the wrong body is selected (the selected body is highlighted in green), hence the rebuild error.

6. Rebuild errors in Assembly are usually Mate errors. Edit the mate to redefine the missing entities. It is also recommended to start from the top and work your way down in the mate list while correcting the erroneous mates.

There are a lot of rebuild errors that you may encounter during your personal experience while working with SolidWorks. Listing and explaining all of them is beyond the scope of this article. But almost always, you can fix any rebuild error by editing the feature that threw the rebuild error/warning.