We will learn in this article how to create a fillet in SolidWorks!

Most often used feature in Solidworks

Solidworks is a Computer Aided Design software. It is used to draw 2D sketches and technical drawings for manufacturing purposes. It is also used to design 3D models, which have special domain command modules/tools as well like weldment, surfaces tool, sheet metal, mold tool, rendering tool, simulation, and many more.

Design models in Solidworks are simple and straightforward forward you start with basic sketches, then add or apply features to that sketch. Then you apply more features to get the designer geometry or shape of the model. All the features are well categorized in separate tool tabs. For Example, if you are working with sketches then under the sketch features tab you will find all the necessary and required features. These features will help you in drawing a well-defined sketch for or from the model drawing.

Fillet feature command is a feature used to create rounded edges between the two faces in 3D, two tangent arcs, and adjacent lines in 2D. We can also say that the filled command created rounded internal or external faces on the model. You can fillet all edges of a face, selected sets of faces, selected edges, or edge loops.

In fillet, we have to define the radius of the roundness. We have various types of filled-in Solidworks which give more flexibility in generating the desired shape of the model.

Types of Fillet in Solidworks. 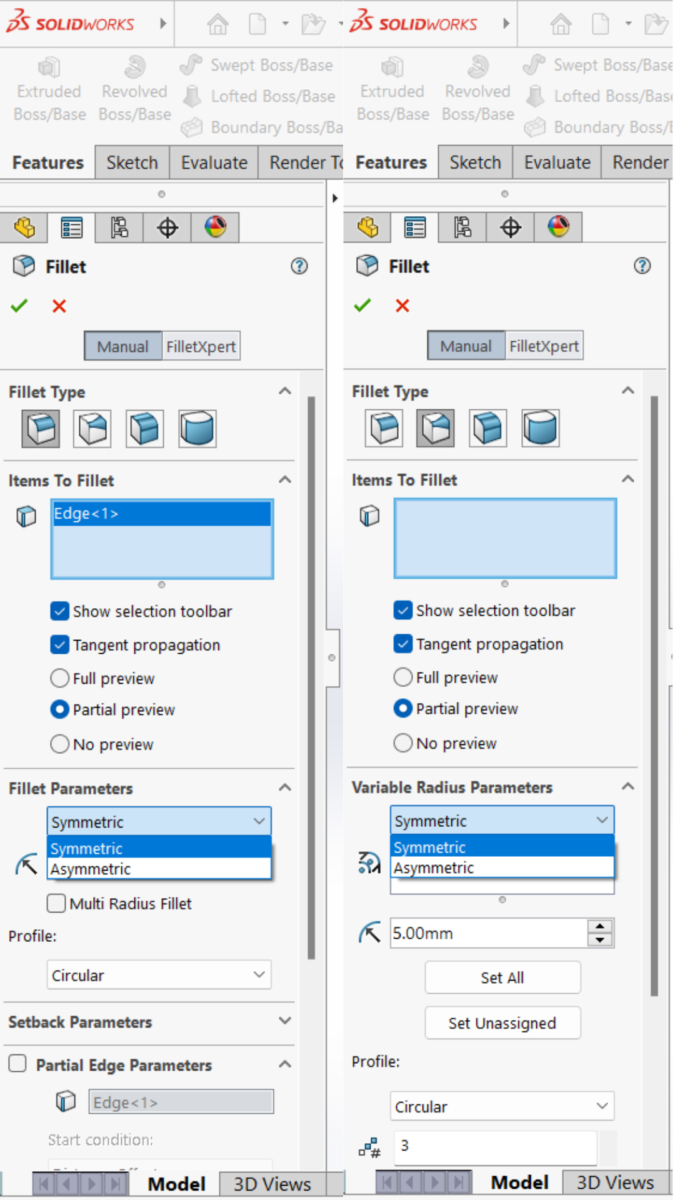 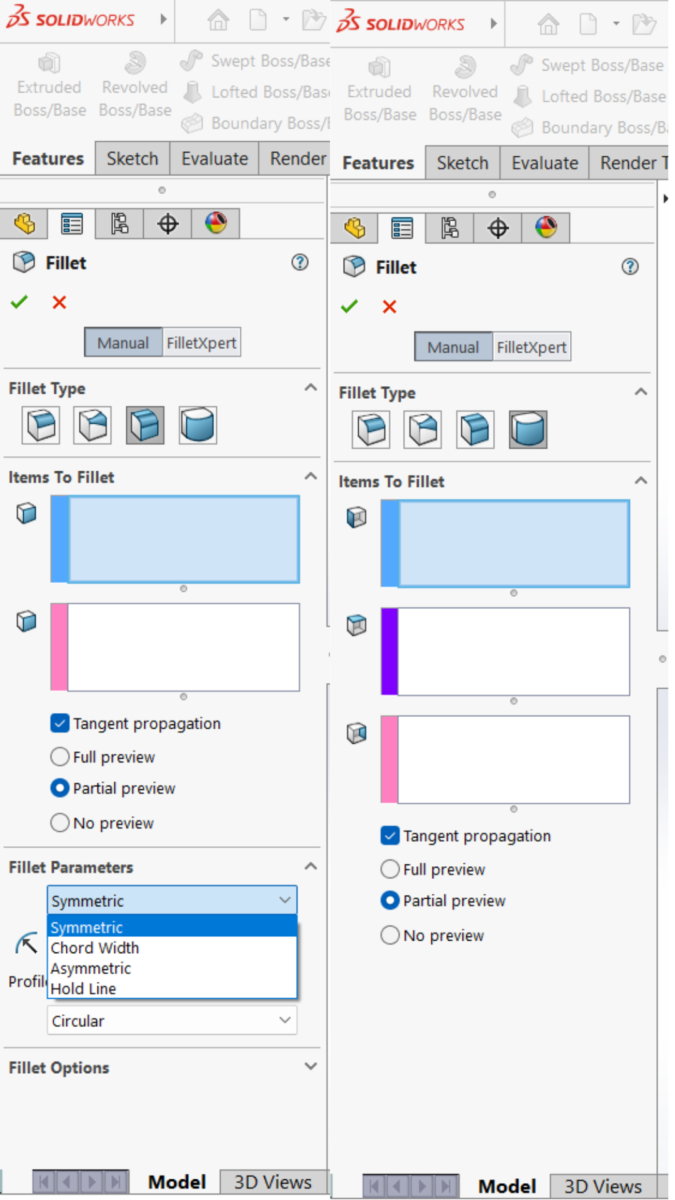 Now we will see how to apply these fillet types in the model. This way you can figure out how can you use this command in your model.

To apply fillet you have to be ready with the 3D model. Then you select the features to tab under that you will see the Fillet option in Command Manager. Select the fillet option and apply the type of fillet you need after imputing the necessary parameters. 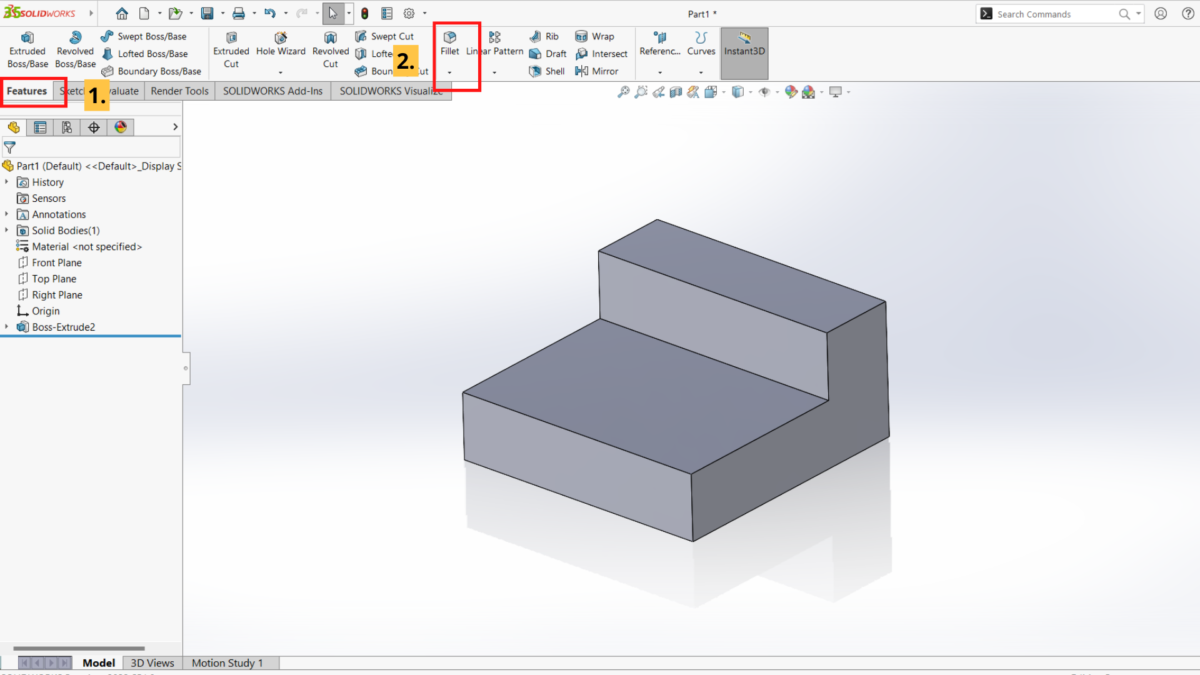 In the case of Constant fillet Asymmetric when we select the edge the insert table is shown which shows the reference line to the relevant face. We have to give radius 1 and radius 2 with respect to the faces. The fillet created will follow the same parameter through the edge. For Example, if we select one edge then we have to give two radii R1 (radius 1) 10mm and R2 (radius 2) 20mm. Then click Ok to see the fillet.

See also  How to Delete a Body in SolidWorks?

This feature is fairly similar to the constant fillet but one difference is we can define two different or variable Radius. It will keep that parameter constant in the case of a Symmetric Variable fillet. When you use this filled and select the edge or face two insert table is shown one at the start of the fillet and the second at the end of the fillet. In this, we have to give two radii one at the starting point and the other at the endpoint. What this fillet option do is create a constant curvature fillet with respect to the faces and this curvature gradually increases or decreases according to the second radius. For example, if you choose one edge to apply this fillet and define the two variable radii VR1 10mm, and VR2 20mm. The filled created will have gradual incriminate from VR1 10mm to VR2 20mm.

In the case of variable fillet Asymmetric we have to provide one more radius at the start and end of the fillet.

In face fillet, we create fillet on the edge which is shared by the two faces. In the face fille,t we have four fillet parameters those are Symmetric, Asymmetric, Chord width, and Hold the line. We can select multiple faces in the first face selection and second face section we have to select only one face which shares common edges with these faces or vice versa.

See also  How to Import Files from AutoCAD to SolidWorks?

To apply face fillet we have to select the two adjacent faces of the model in a property manager. Then we have to give the radius value. Then click on OK. In the case of the Asymmetric fillet parameter, we have to give two radii.

In the case of a full round fillet, the fillet created is tangent to three adjacent face sets With one or more faces tangent.

To apply a full round fillet

select the first face in Side Face Set 1.

At last, select the third face which is opposite to the first face (First Face Set 1) in Side Face Set 2.

Some settings in the fillet will help in getting the required shape and helps in better visualization before applying any fillet.

Tangent propagation will extend the fillet to all the faces that are tangent to the center face.

The full Preview option displays a fillet preview of all the edges according to the selected fillet type.

A partial preview displays a fillet preview of one edge only.

No Preview option helps improve the rebuild time with the complex shape, geometry, or model.