What is an Engineering design?

The engineering design process is a series of steps that engineers follow to find a solution to a problem. The processes which are followed to come up with a product are –

Out of these processes “make a model or prototype” is very important as this step lets the pre-production team know how the product is going to look after manufacturing. The designing part involves creating 2 d views of the final product. In creating the final part various sub-parts or assemblies are needed. These parts and assemblies are joined in the software according to how they’re going to attach to the main body.

While designing a large component assembly we need to define the position of the part in that design. The position is fixed or with a minimum DOF ( Degree of Freedom). While part assembling on software the designer should know how the component is going to assemble. In actual assembling, the same track is followed by the worker. When will the first part be going attaching to the main body?

See also  How to Export Files from Fusion 360 to SolidWorks?

However, by designing the assembly on the software we come to know the clearances between the components. Secondly, the overall visualization of the assembly, like how it is going to look after manufacturing and assembly. Thirdly, the sequence in which the parts are going to attach to the main body.

However, while designing the assembly on SolidWorks the parts often have some degree of freedom. These degrees of freedom are not suitable. To restrain this degree of freedom mates are used. Mates is a feature available in the designing software. In this article, we are going to see Advance mates in Solidworks. What is the function of that mate and how can we apply those to constrain the undesired motion.

To apply the Advance mates we need to open parts in the design assembly. They’re using the mate option we can connect the two or more parts using the mate’s option. In mates option, we have many options available like Standard, Advanced, Mechanical, and Analysis. In this article, we will look after Advance mates. 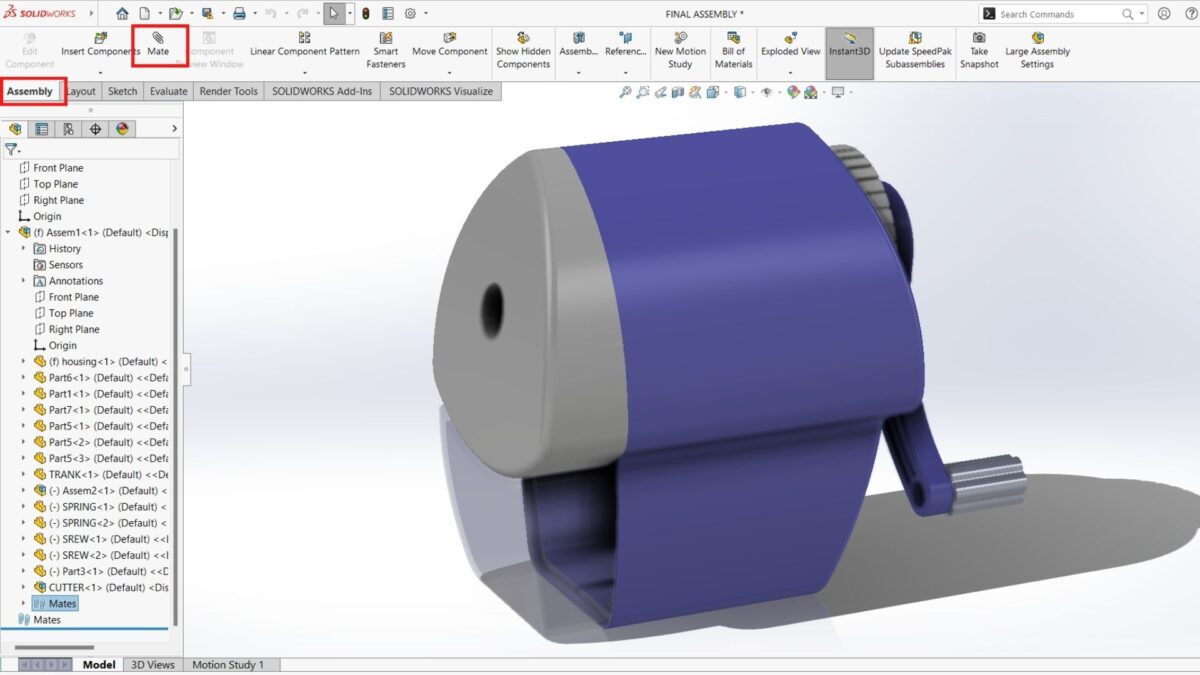 See also  How to Make a Component Independent in SolidWorks? 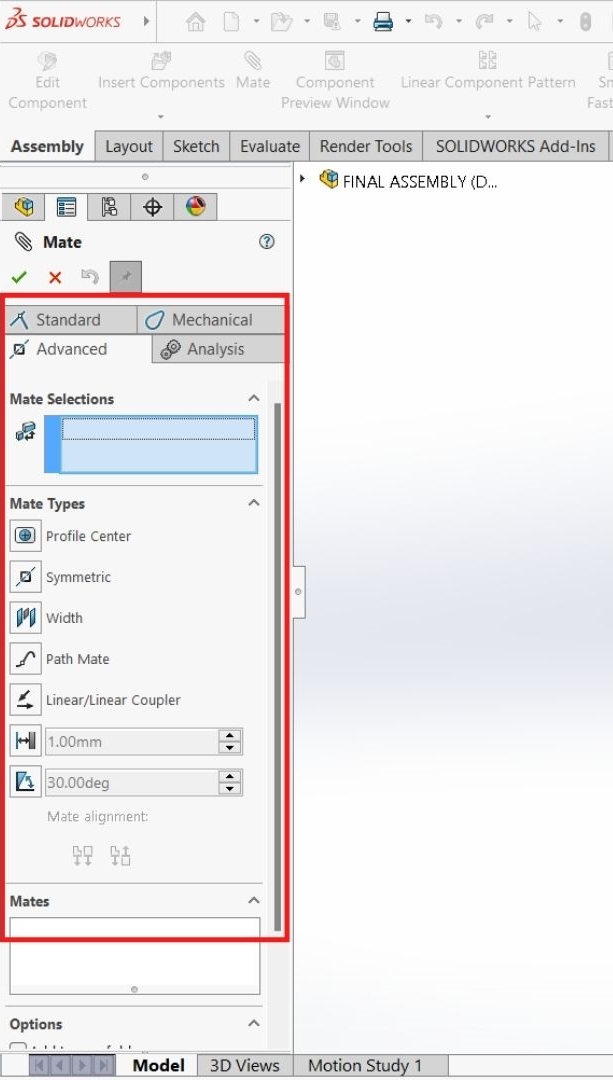 In the profile center, we have to select a profile that is not circular. Then select the profile of the other part. Now the part will combine at the center of the profile which we have selected. We can move the components by giving the value in the distance space. That option will offset or move the profile by a certain value. We can change the orientation as well with respect to the profile center. 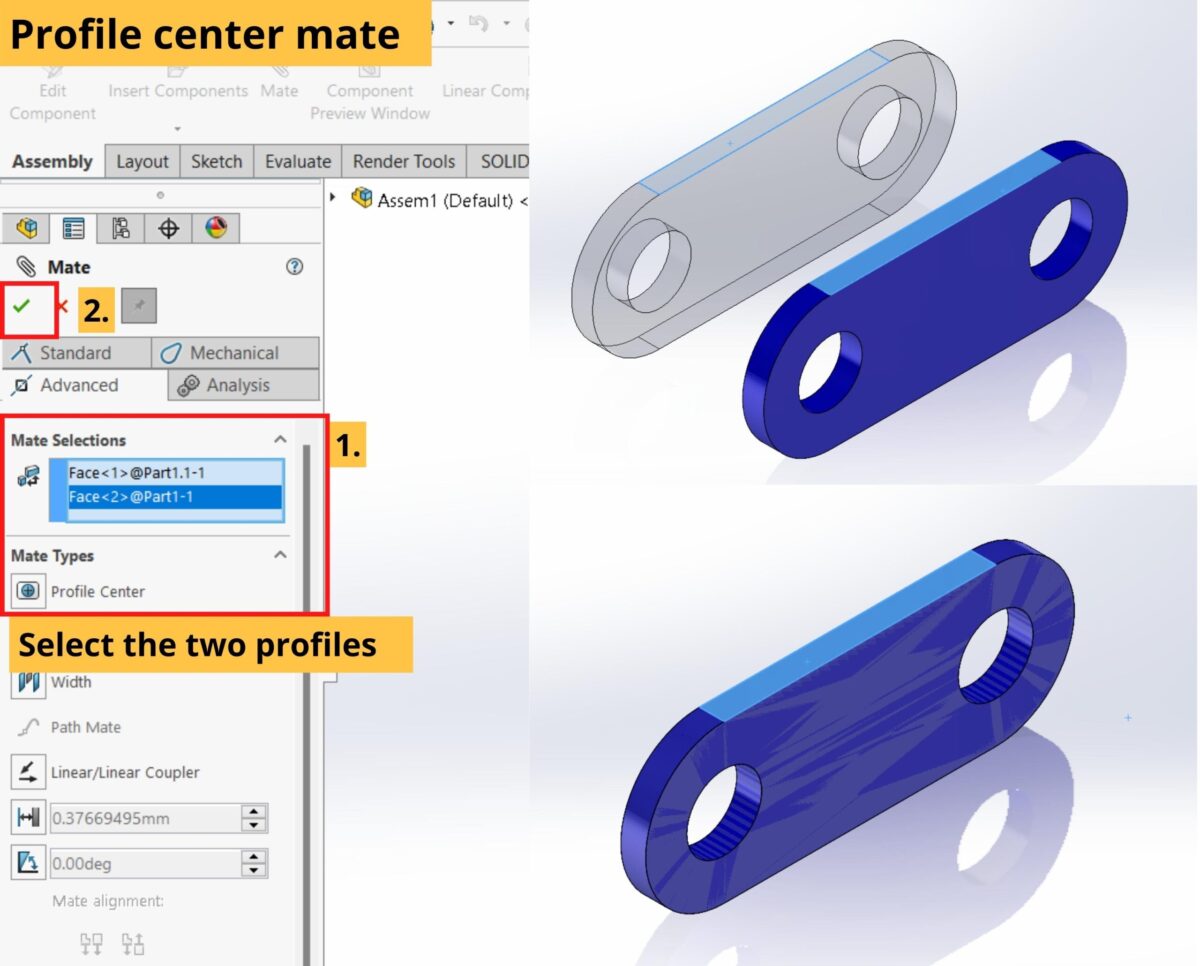 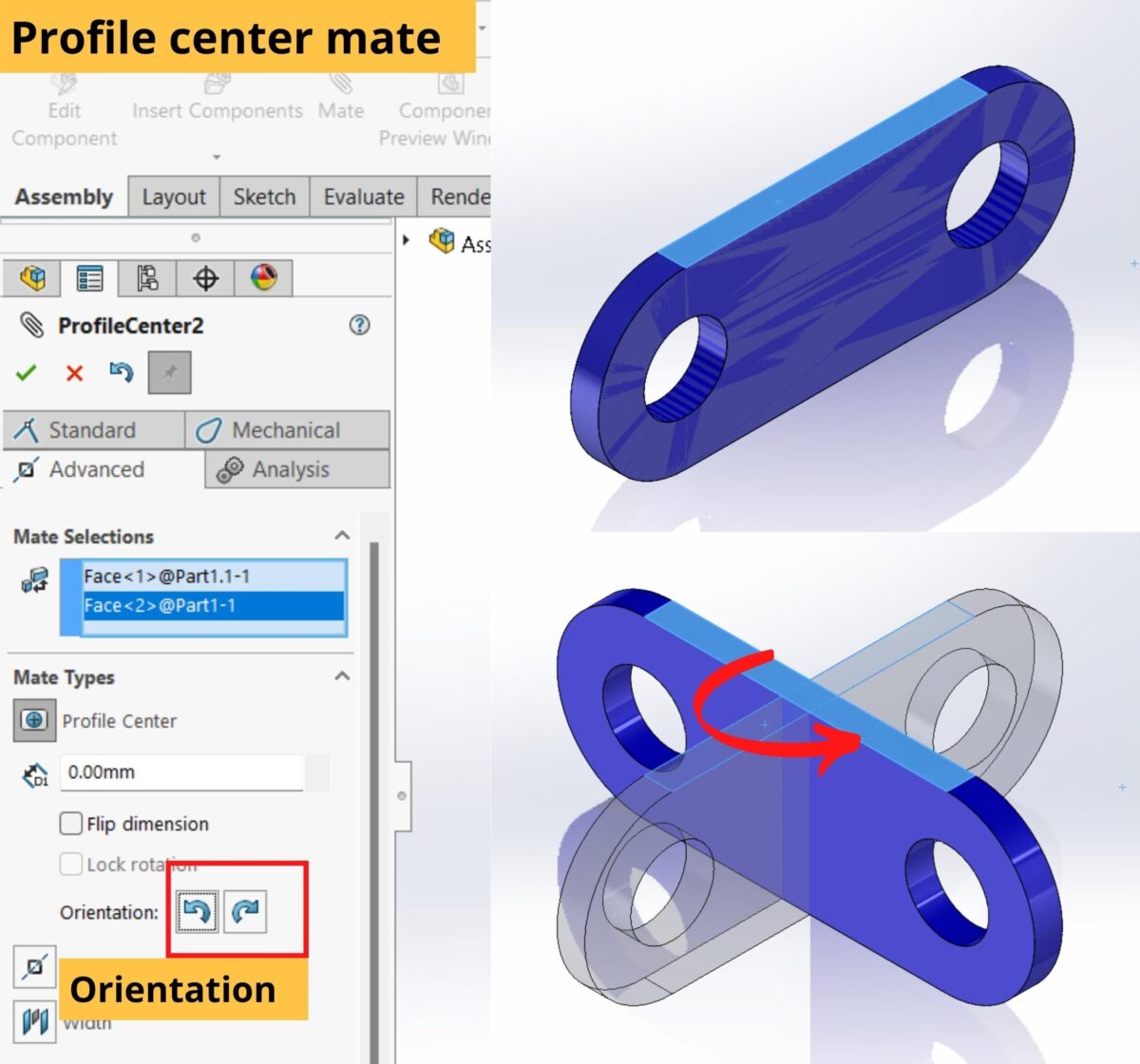 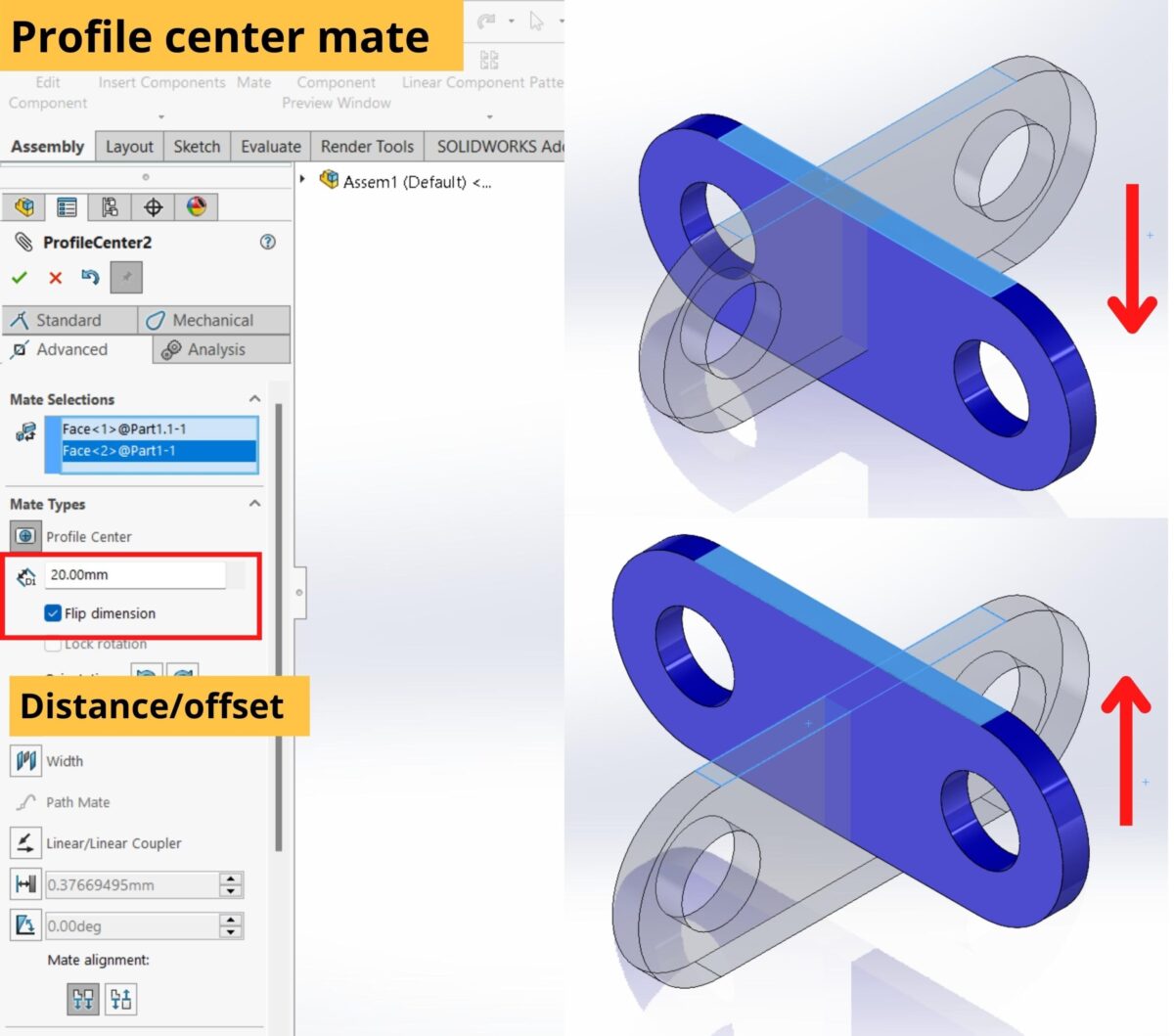 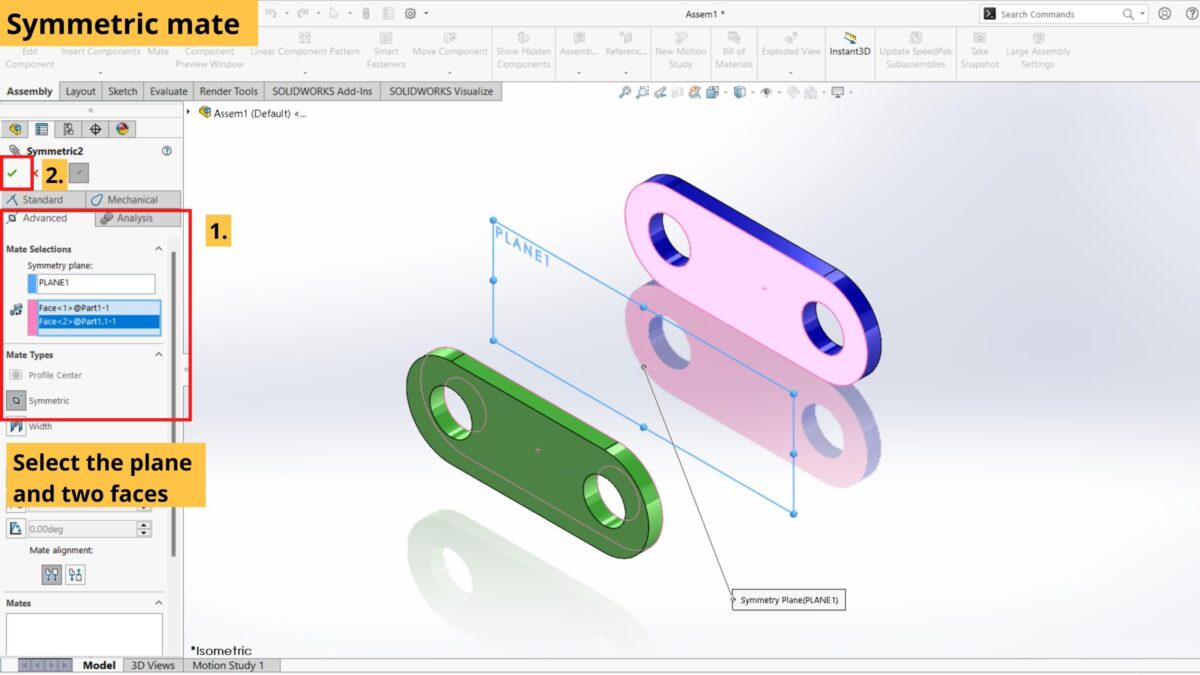 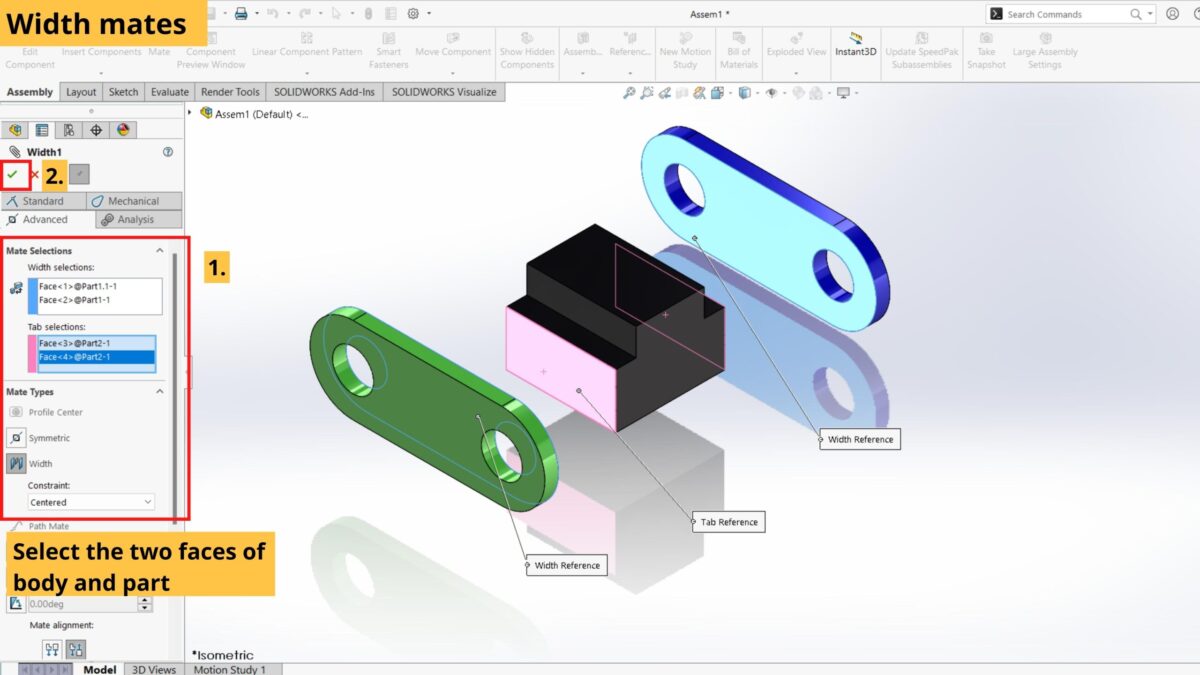 We can give the center distance or offset percentage to the mate. This will move the body from the center by a certain value.

See also  How to Hide Relations in SolidWorks? 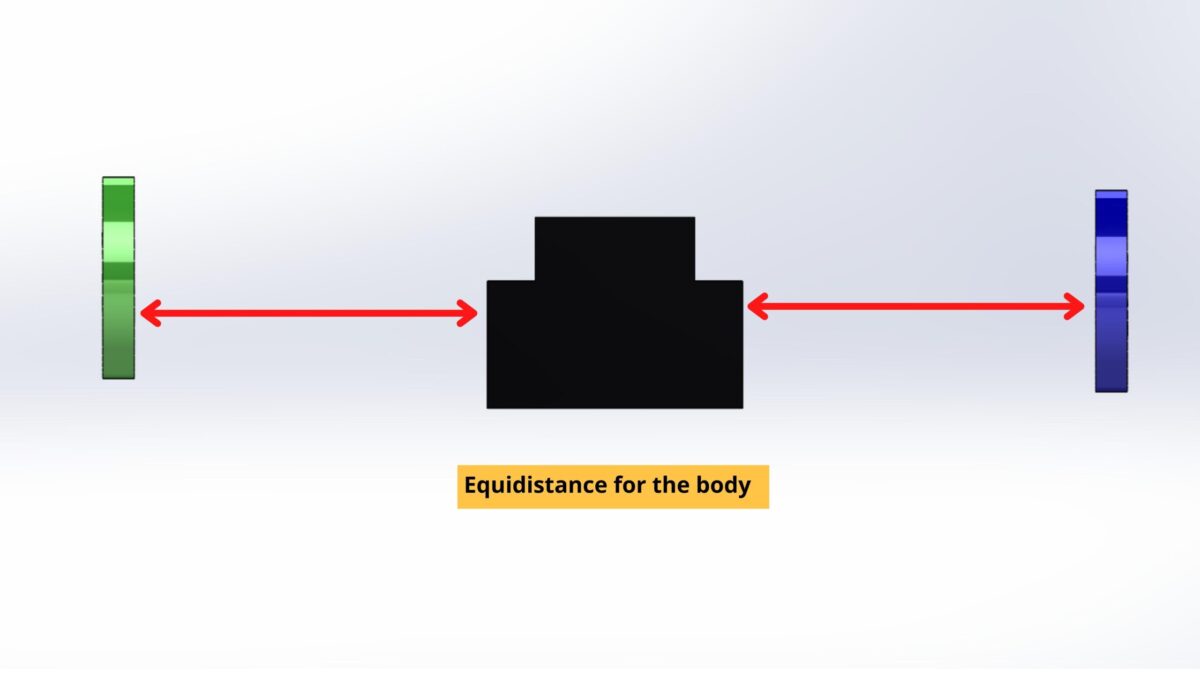 In path mate, the body follows the certain path which we define. We have to select the point or profile of the body which has to follow the path and the path line. This way the body is attached to the path sketch and follows it if we move it. 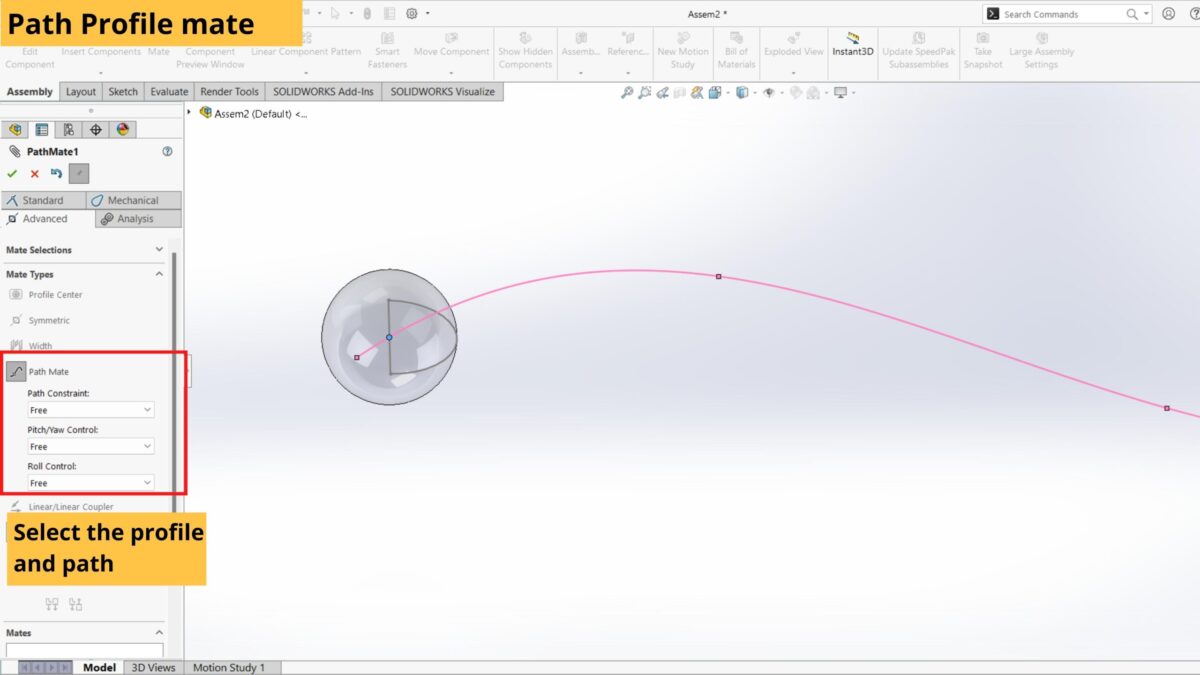 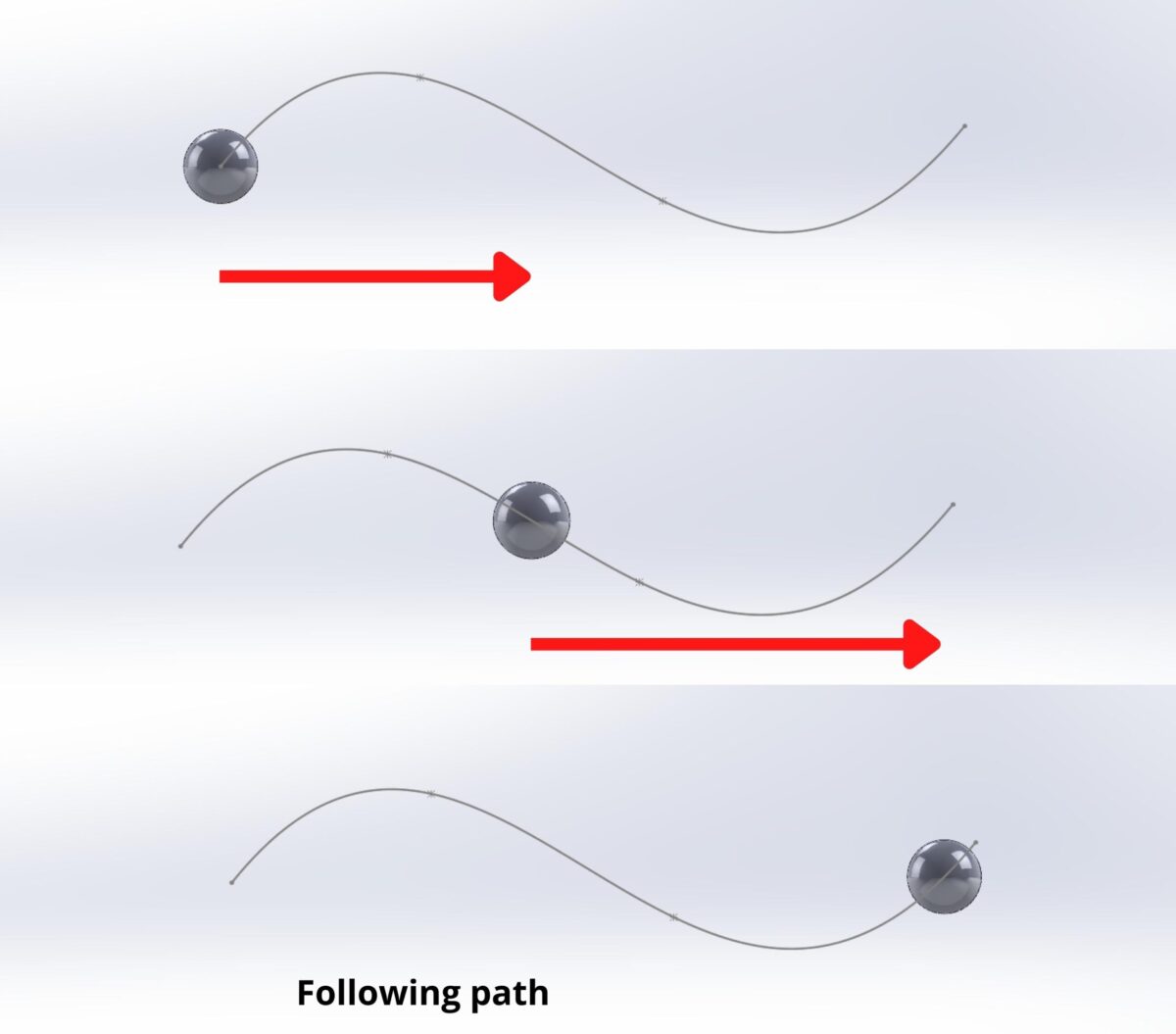 We use this feature when we want to move the two parts in the opposite direction or the same direction. We have to select the edges to give the direction of movement the edges. After applying this feature option, if we move the one part the other part will move in the opposite direction with respect to the first part. we can also define the ratio of movement by giving the input value in Ratios. Also, we can reverse the motion by clicking on the reverse. That will move the two parts in the same direction. 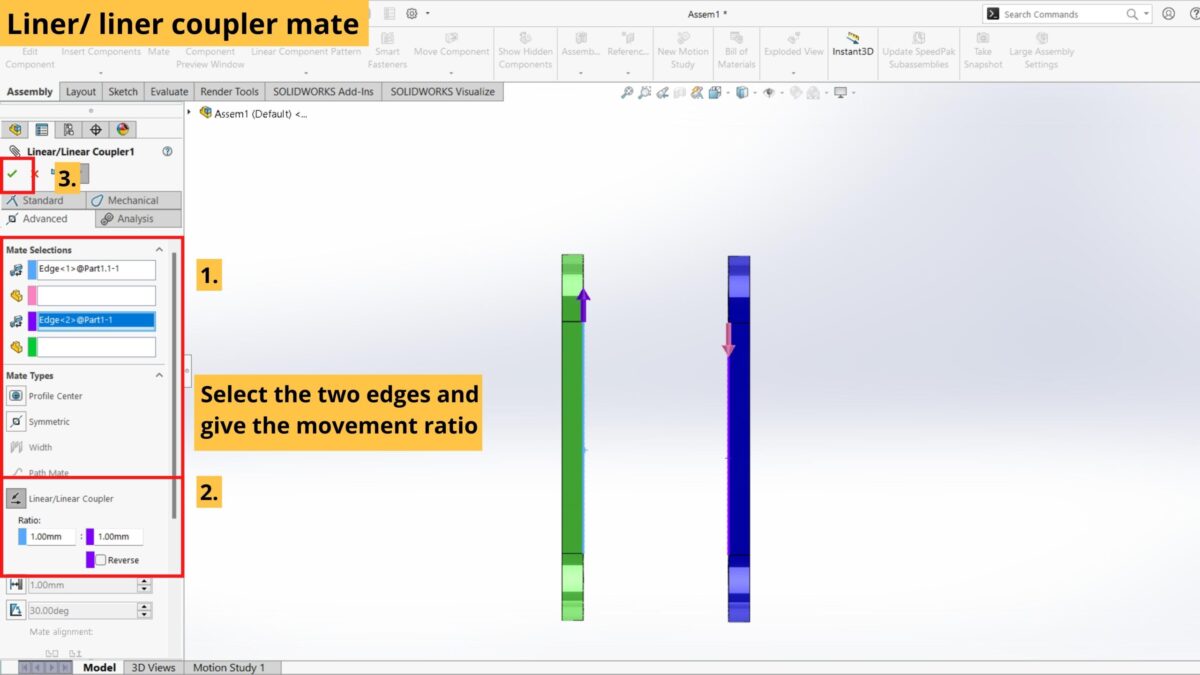 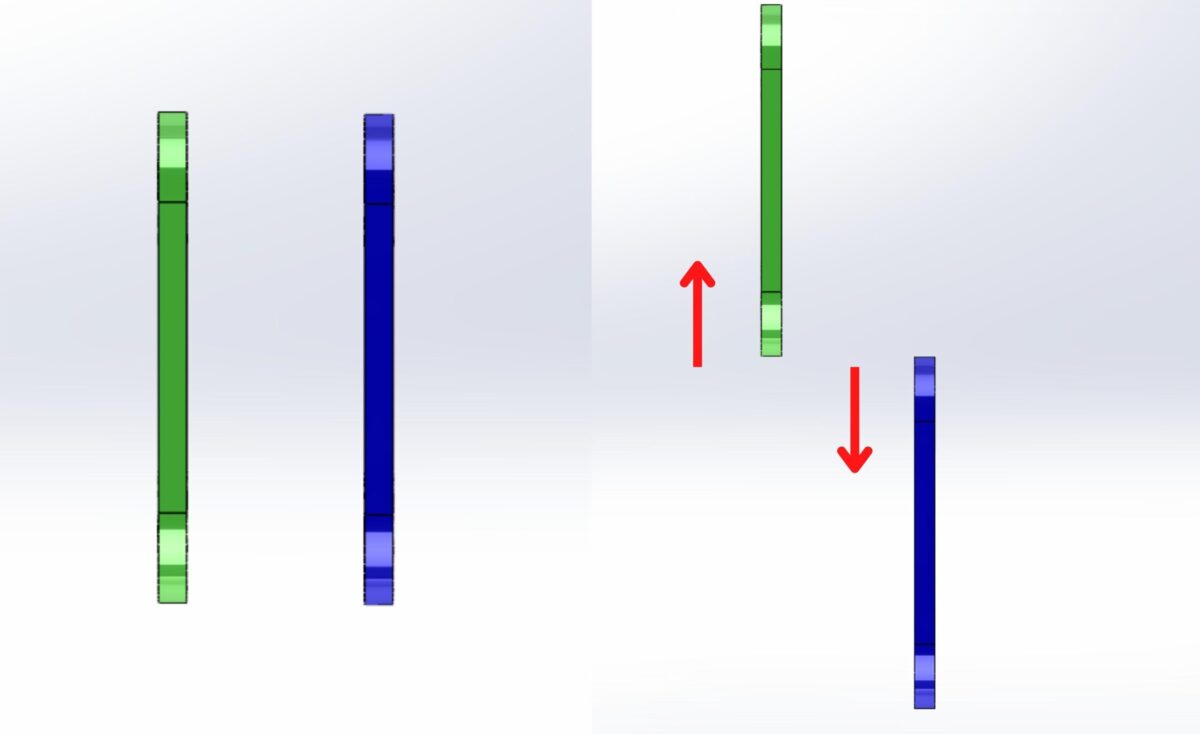 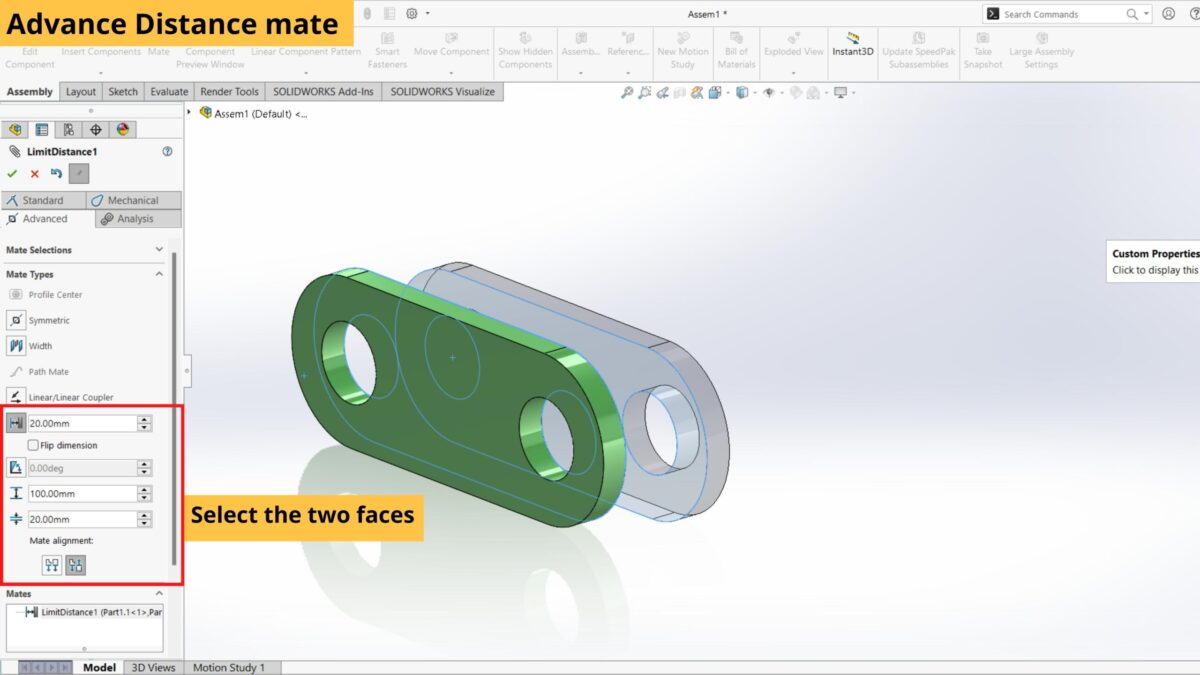 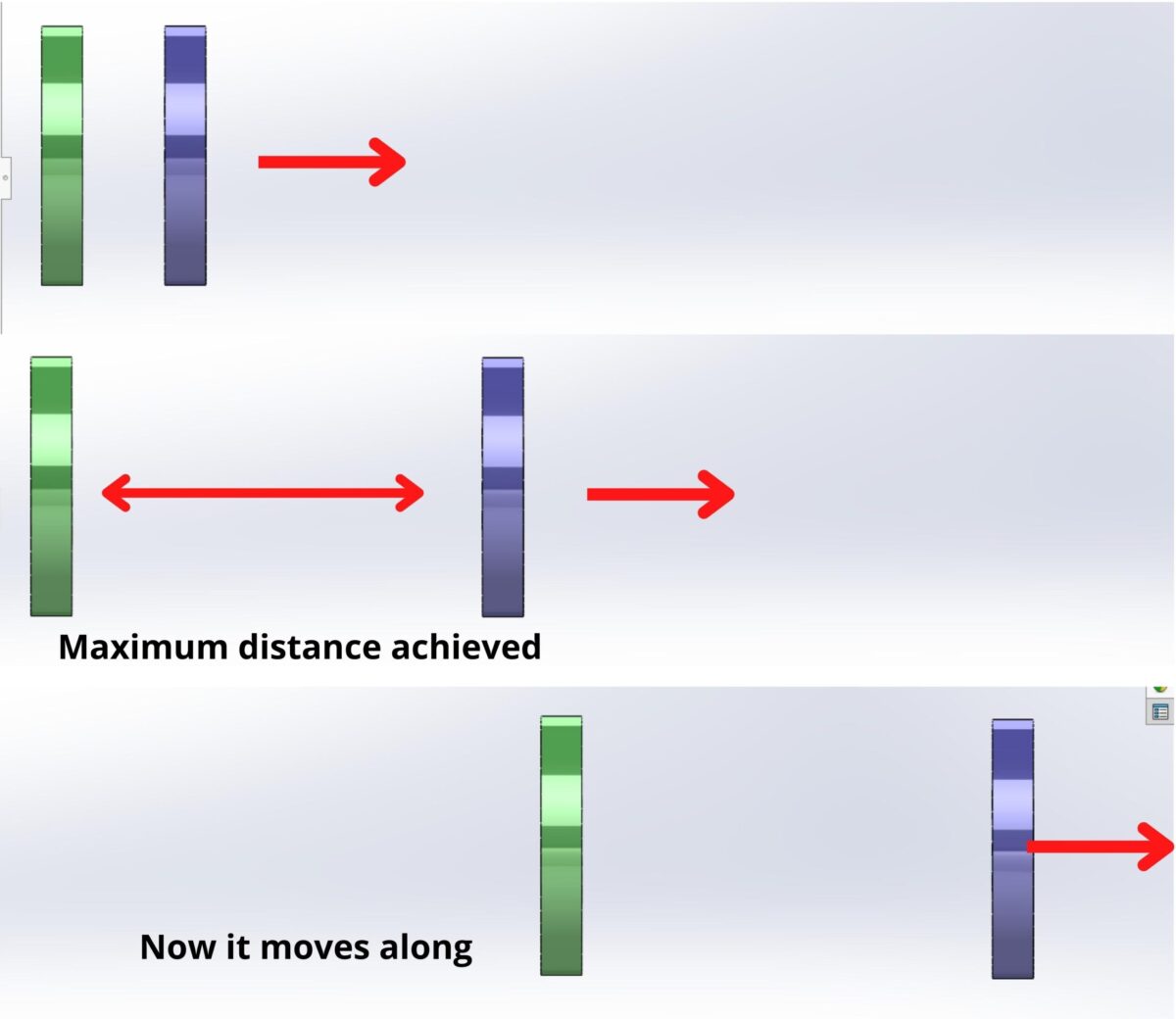 In Angle mate, we can give the maximum and minimum angle between the two faces or bodies. 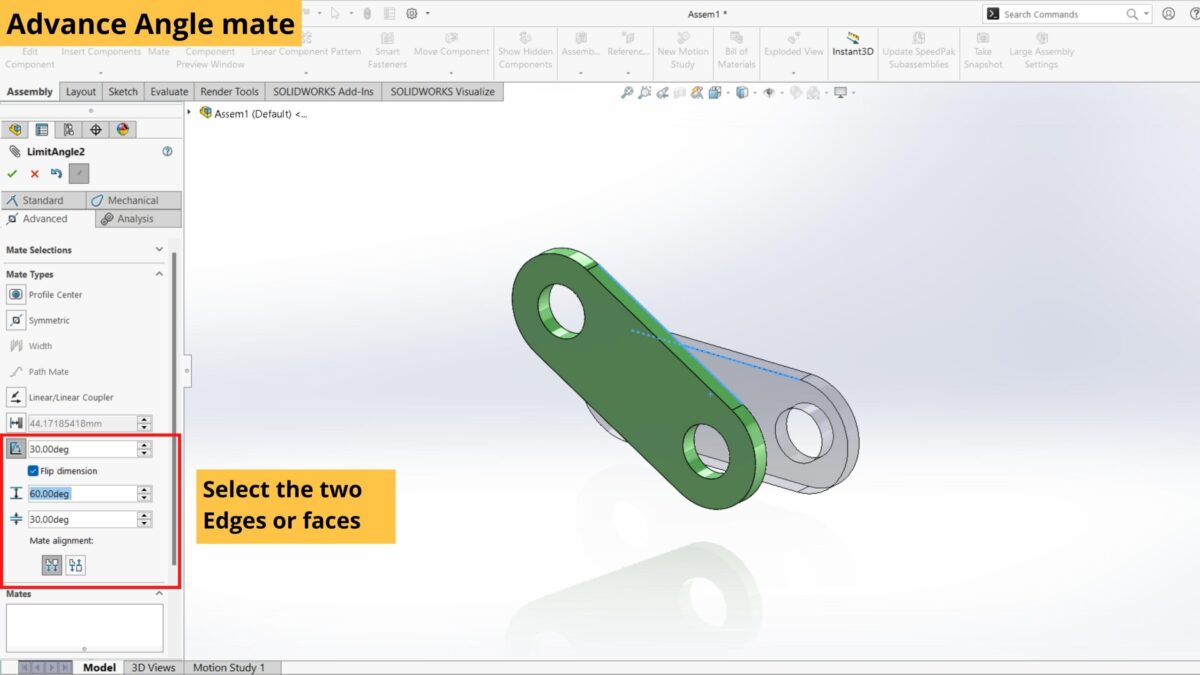 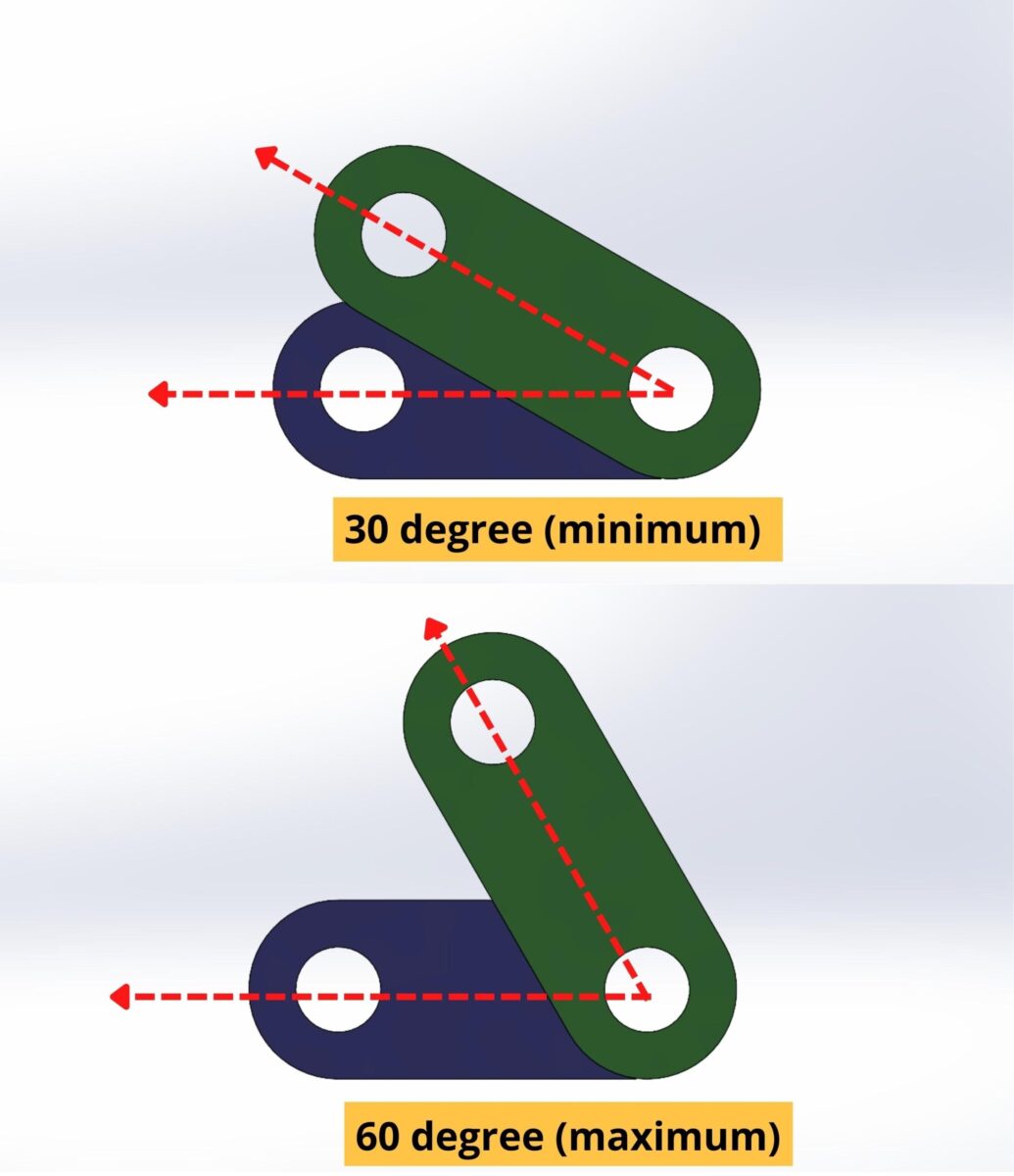